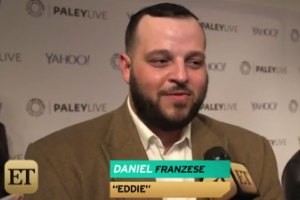 Out actor Daniel Franzese has endorsed use of pre-exposure prophylaxis, or PrEP, to reduce the risk of contracting HIV.

Franzese, who is best known for playing Damian in the film Mean Girls, joined the cast of HBO's Looking in season 2 as Eddie, the HIV-positive love interest of Agustin (played by Frankie J. Alvarez).

In an interview with the Advocate, Franzese said that his character is not defined by his status.

"Eddie's not sick," he said. "There's no sad things that have to do with Eddie.There are problematic things that he has to deal with in his life, but most of them are social. It's not not going to be a 'very special episode' about Eddie. I found that to be so progressive."

PrEP, commonly known as Truvada, has its critics who claim it's too early to embrace as a prevention drug. Some point to its high price tag (up to $1,000 a month for the uninsured), while others worry that the once-a-day pill will encourage risky sexual behavior.

Franzese, who recently joined the Elizabeth Taylor AIDS Foundation as an ambassador, said that if he were single, PrEP is something "that I would immediately be on."

"I think it's an important thing that misconceptions about PrEP be clarified, not only for our community but for everybody, to learn all of the different measures that we can do to prevent and stop new infections," he said of how the issue is being handled on Looking.