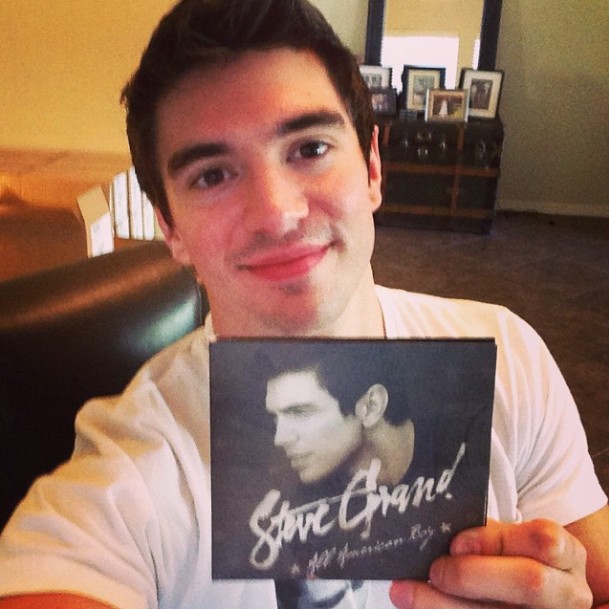 ‘So grateful to my KickStarter backers for making it possible...’

Openly gay singer/songwriter Steve Grand took to social media on Monday to post the first photo of him with his debut release, the aptly named All-American Boy.

"Holding it for the first time,' he wrote on Instagram. 'I've waited a long time for this moment. So grateful to all of you for making my dream come true."

Last February, the 25-year-old Chicago-area native launched a Kickstarter campaign to fund a full-length album. At that time, he never imagined it would close with more than four times the original goal of $81,000.

The campaign wrapped up in March 2014 with pledges of $326,593 from 4,905 backers, making his debut album the third most-funded music project in Kickstarter's history – and the most-funded music Kickstarter among musicians who have never been affiliated with a major record label.

"It's been a great journey," Grand told ChicagoPride.com. "I had to push myself in all kinds of ways to make this record happen. I am so grateful to my KickStarter backers for making it possible for me to have all these experiences and put this record out into the world."

Grand's full-length debut album is being released on March 24, 2015. Update: According to Grand's publicist, distribution changes now mean an updated release date of March 23, 2015. All-American Boy will be available on Amazon and iTunes. (The album is currently available for pre-order on iTunes.)

ChicagoPride.com editor Gregg Shapiro previewed the new release and writes, "Grand wisely included the title cut, the song that first introduced him to his far-reaching and devoted followers. It also features 'Stay,' another song with which the Grand Nation (his fans) will be familiar. Among the new material the sexy 'Soaking Wet,' intoxicating 'Whiskey Crime,' dance-floor-destined 'Better Off' and the beautiful 'Back To California,' are all welcome additions to his repertoire."