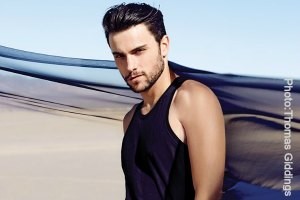 Jack Falahee, who plays gay law student Connor Walsh on the ABC hit drama How To Get Away With Murder, says he's fascinated that people are curious about his sexuality.

Falahee's steamy sex scenes have received plenty of attention – negative and positive – and in an Out cover story last month, the 25-year-old created headlines when he refused to answer whether he's gay.

As the series wraps up its first season next week, Falahee still isn't talking.

"We don't ask the actor playing James Bond what his sexual preference is," Falahee said during a SiriusXM Progress interview this week. "So I don't know what it is, really, with trying to out actors who portray gay characters on television. But it is some sort of fascination in society."

"I think we're projecting onto actors in a way,' he said. "I think we're expecting them to be their characters when, at the end of the day, this is my job and I'm an actor portraying a role on a fictitious television show."

"I just think it's interesting," Falahee continued, "because I have a body of work before Connor Walsh that is primarily heterosexual and yet people want to ask – you know, no one asks any other man, or woman, on my show, about their sexuality, and that's what fascinates me."