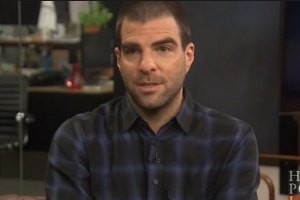 "There's this weird space that's occupied by people like James Franco, they also mentioned Nick Jonas of the Jonas Brothers, where there's almost queerbaiting going on," Zepps said. "They're sort of icons in the gay community, but they're not themselves gay, apparently."

Jonas plays a closeted gay MMA fighter on DirecTV's Kingdom, while Franco's involvement in the subject includes numerous gay roles as well as work behind the camera on several gay-inclusive films.

"These guys who are, in many ways, considered very conventionally desirable, attractive leading men ... lending themselves to these kinds of stories is a valuable thing for our culture," the 37-year-old Quinto said.

Quinto, who is best known for playing a young Spock in the 2009 Star Trek reboot and last year's sequel, Star Trek Into Darkness, plays Franco's lover in I Am Michael.

(Related: James Franco: I Am Michael asks whether being gay is choice "in healthy way.")