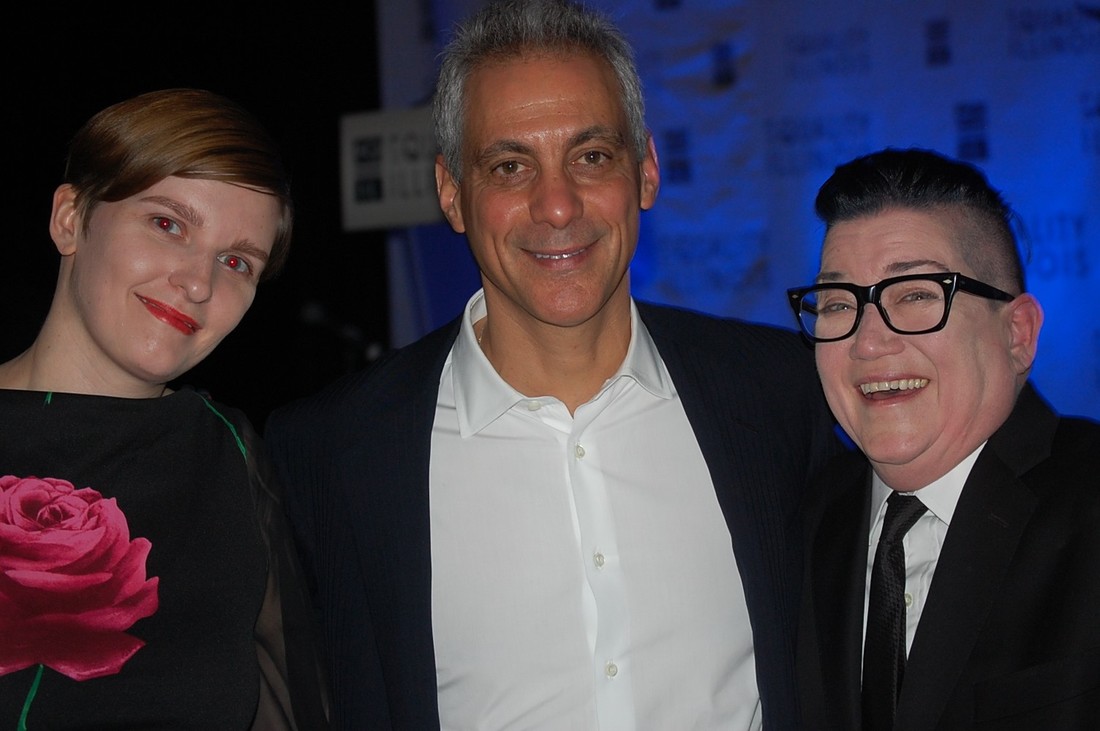 photo credit // anthony meade
Chicago, IL - The 2015 Equality Illinois Gala, appropriately held on Valentine's day, created an atmosphere of not only equality, but of love.

"With the gala falling this year on Valentine's Day, we highlight the significance that this first full year of marriage equality in the state holds for LGBT Illinoisans," Equality Illinois CEO Bernard Cherkasov said in a statement.

More photos from the Gala

Jane Byrne was the first mayor in Chicago to officially recognize the gay pride parade in Chicago and end police raids on gay bars. Rep. Mulligan was a trailblazer in her party, advocating LGBT rights to pave the way for other state legislators. Topinka, the first Republican to support the equal marriage bill, was a staunch leader in the gay rights movement being there before "it was even fashionable."

As the event continued, Equality Illinois CEO Cherkasov reminded attendees that as the state celebrates the upcoming first anniversary of equal marriage, "love is at the heart of what we do" but "it's not enough to make progress, we've got to defend it."

Mayor Rahm Emanuel, who was suffering from laryngitis (the speech was read by his wife, Amy Rule) wished the audience a Happy Valentine's day, also saying "It is a different time this year than last, thanks to Governor Pat Quinn and the legislators involved in the marriage bill."

In keeping with the evening's theme, the mayor and first lady emphasized that marriage was all about love. "There is no longer straight or gay marriage," Rule remarked on behalf of the mayor. "That is how it is in the eyes of people who love each other and now it is that way in the eyes of the law."

Cook County Commissioner Jesus "Chuy" Garcia and Ald. Bob Fioretti, both challengers to Emanuel in the Feb. 24 election, were in attendance.

The Equality Illinois Political Action Committee is expected to present its mayoral endorsement in the next couple of days.

The Equality Illinois Business Leadership Award was presented to GCM Grosvenor and its Chief Executive Officer Michael J. Sacks. Sacks played a prominent role in spearheading business support in the fight for marriage equality. "I've been proud to be a teeny teeny part of the struggle and success," Sacks said in his acceptance speech.

Born and raised in Belleville, Illinois, Lea DeLaria was the recipient of the Equality Illinois Freedom Award. DeLaria is the star of the Netflix series "Orange is the New Black" and is a groundbreaking performer on stage and screen.

The Equality Illinois Freedom Award was also presented to the TransLife Center of Chicago House, which provides critical, life-changing services for transgender individuals impacted by poverty, homelessness, and health issues.

"To me, the gala is the opportunity for our community to celebrate our successes, recognize all those who've made those possible and recommit to the work that still lies ahead," Cherkasov told ChicagoPride.com. "I am especially thankful for the tremendous community and business support that our gala receives; the raised funds will enable us to expand our initiatives into more parts of the state and reach and empower more Illinoisans."

More photos from the Gala