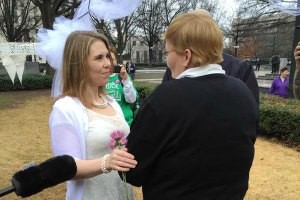 Alabama on Monday became the 37th state, plus the District of Columbia, where gay and lesbian couples can marry after the Supreme Court refused to delay implementation of two rulings striking down the state's ban on gay marriage.

The highest court responded to the state's request just minutes before courthouses were set to open.

In a strongly-worded dissent, Associate Justice Clarence Thomas, who oversees states in the Eleventh Circuit Court of Appeals, including Alabama, said that he and Justice Antonin Scalia disagreed with the majority.

"I respectfully dissent from the denial of this application," Thomas wrote. "I would have shown the people of Alabama the respect they deserve and preserve the status quo while the Court resolves this important constitutional question," Thomas wrote.

Among the first to be issued a marriage license were Tori Sisson and Shante Wofe of Tuskegee, who camped outside the Montgomery County courthouse to be first in line when the courthouse doors opened.

Several judges, however, were resisting the order, siding with Alabama Chief Justice Roy Moore, who argues that federal district court's opinions "do not bind the state courts of Alabama but only serve as persuasive authority."

Probate judges in Covington, Washington, Calhoun, Tuscaloosa and Clarke counties have said that they will not issue such licenses.

"I do not think I am required to compromise my religious beliefs to be Probate Judge," Clarke County Probate Judge Valerie Davis said in a statement. "Alabama law does not mandate me to issue marriage licenses to anyone of any gender."