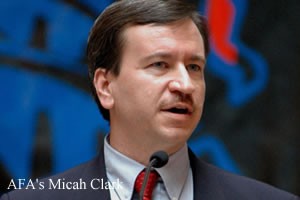 Indianapolis, Indiana - Indiana lawmakers are expected to debate a bill which could allow business owners to refuse to serve the LGBT community based on their religious beliefs.

Senator Scott Schneider is expected to introduce the measure in the upcoming session that begins Tuesday.

"The focus has been on same-sex marriage because that's the hot topic right now," Schneider told The Indianapolis Star. "It's important to have some religious freedom and protection."

Micah Clark, executive director of the American Family Association (AFA), a group which opposes gay rights and is lobbying for the bill's passage, said that the bill would allow small business owners to refuse service to gay couples based on his or her religious beliefs.

"The freedom of conscience bill really about limiting government's ability to squelch freedom of religion, conscience or speech," he said.

One version of the proposal states that Indiana may not burden a person's right to exercise of religion unless it can prove that its actions are "essential to further a compelling governmental interest and is the least restrictive means of furthering" that interest. A person would also be able to claim religion as a defense in court.