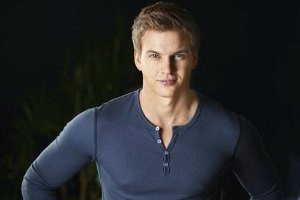 Glee returns for its sixth and final season next month with five new cast members, including Canadian Idol finalist Marshall Williams, who will play a gay "football stud."

Williams, 25, will play Spencer, described by producers as "post-Glee gay – no one messes with him about his sexuality because he will kick their asses if they do."

As a model, Williams worked with Abercrombie & Fitch and Diesel. He was last seen in the Disney Channel Original Movie How to Build a Better Boy.

The other new cast members include Samantha Ware, who plays Jane, a "pretty gal" who wanted to be a Warbler; Billy Lewis Jr., who plays Mason, a weird kid who gives off "a gay vibe"; Laura Dreyfuss, who plays Madison, a new member of the Cheerios and twin to Mason; and Noah Guthrie, who plays Roderick, a "chubby and shy teen with a voice like Otis Redding."