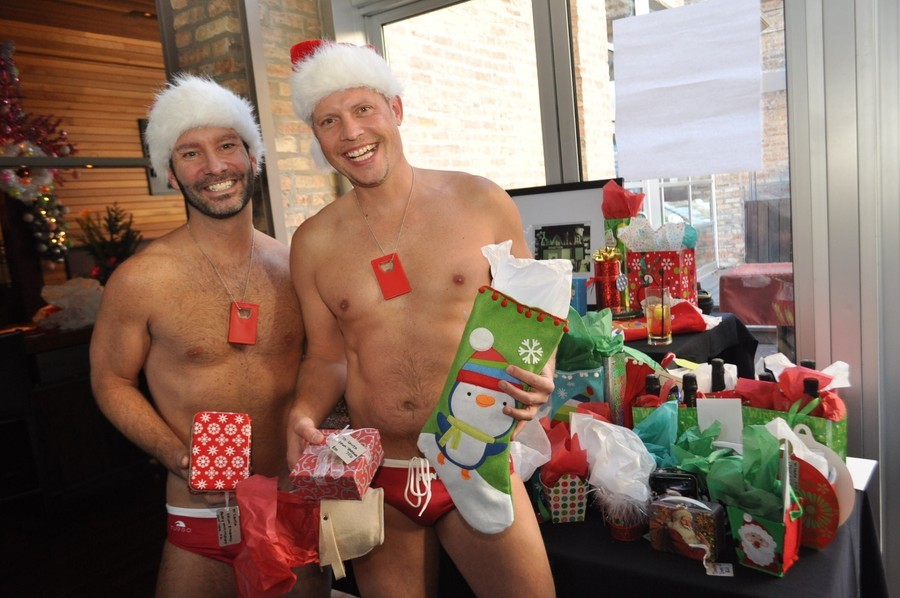 Chicago, IL - This Saturday, Dec. 6, head on over to Sidetrack to help Boystown ring in the season with the gayborhood's favorite new holiday tradition: The Most Fabulous Santa Speedo Run. Organizers and partners (in this as well as in life) Karl Sponholtz and Jeff Colgan are excited to be bringing their silly and sexy holiday fundraiser back for the fourth year in a row -- bigger and better than ever before!

"Last year, the temperature fell to 17 degrees -- we thought we'd have a low turnout, but we got just the opposite!" Sponholtz told ChicagoPride.com. "I think people really felt up to the challenge and it made warming up afterwards that much more fun! There were plenty of volunteer 'Santa Warmers' on hand, and we're hoping that many more return this year."

Sponholtz and Colgan adapted the Most Fabulous Santa Speedo Run from similar events held around the country (the Windy City branch raises money for the Chicago Diabetes Project) in an effort to create a fun winter event that would bring the Chicago LGBT community together to directly benefit local nonprofits. Their first run, in December of 2011, was held in Andersonville and, after only two weeks of planning, managed to bring out 50 runners and 150 supporters to raise $3,000 for Vital Bridges.

The event's growth over the last couple years speaks for itself. After packing sponsor bar Sofo Tap to capacity, the dup decided to move the run to Sidetrack in Boystown for its second year, which saw participation more than double to 150 runners and nearly 350 supporters. Chicago's LGBT community came together for the day of caroling, entertainment and door prizes by coming on as sponsors and donating to the raffle, which helped raise $7,000.

With their eyes set on growth, The Most Fabulous Santa Speedo Run became even more official last year, seeing Sponholtz and Colgan add online registration and runner incentives such as "Santa Sack" gift bags and t shirts for the first 250 participants. They also teamed up with the Center on Halsted to help benefit their new Senior Center. This new alliance in addition to their growth in sponsors meant that last year's event saw an explosion in participation and money raised.

"Last year we had 200 runners with over 600 in attendance, and raised $21,000 for the Center on Halsted's new Senior Center," Sponholtz said. "This year we are expecting 250 runners with over 800 in attendance and our goal is $30,000 - again for the Senior Center at COH. In addition to all the hot men (and ladies) on this cold day, expect to see some holiday drag and a few group-costumes this year -- nobody knows how to dress up like Boystown!"

This year saw an even bigger rise in corporate sponsorship, both from local businesses like My Fit Foods, Ping Pong and Wilde as well as national brands like MillerCoors and Tito's Vodka. This swell of support helped the duo raise their goals tremendously and beef up this year's Santa Sacks, which are valued at about $125 apiece for the first 250 participants who sell or donate $25. Runners who raise over $200 (of which there are already 20 this year) receive the signature Most Fabulous Santa Speedo Run speedo (this year featuring Rudolph) or sweatshirt. Sidetrack will also be handing out blinking red Rudolph noses to the first 250 runners.

As in years past, there will be a $25 minimum to run and every dollar that Santa brings the duo goes directly to charity. After sign-in and registration, which begin at noon, the whole group will join together for a chorus of "Jingle Balls" -- Most Fabulous Santa Speedo Run's cheeky yearly anthem. At 2:00 p.m. the runners split into two groups (team "naughty" runs clockwise while team "nice" goes counterclockwise) and head out to run along Halsted, Belmont, Broadway and Roscoe, clad only their (usually skimpy) holiday attire (a clothes check is available at Sidetrack for $2).

Costumes in the past have ranged from simply speedos or bikinis, Santa hats and running shoes to garland-laced harnesses, red peek-a-boo union suits, reindeers in drag, strategically placed bows and more. (But a picture is worth a thousand words -- check out coverage from last year's Run here on ChicagoPride.com to see more.)

Not interested in being a runner? No problem! Join the throngs of supporters and official Santa Warmers cheering the runners on and waiting for them at the finish line with mittens and coats. After the chilly jaunt through Boystown, all participants and supporters regroup back at Sidetrack for an afternoon of awards, entertainment and prizes, with the top prize once again being two round-trip tickets anywhere in the lower 48 states from Orbitz Travel.

"It's the perfect event at the perfect time to show off your holiday cheer (and gear!) and do something that's great for the community," the duo told ChicagoPride.com. "It's completely ridiculous and that's why everyone loves it! Sidetrack can hold 1,000 people, and we're ready to hit capacity if the need arises."

Sponholtz and Colgan also tease "a few new sexy bits of entertainment" as well as the return of a very Sexy Santa. For a $5 donation to The Center, you can sit on Sexy Santa's lap and whisper what you want for Christmas in his ear -- selfies welcome and encouraged!

Interested participants can register as individuals or as teams online at mostfabuloussantaspeedorun.com (you'll be re-directed to The Center on Halsted's website) or bring donations with to Sidetrack on the day of the event, this Saturday December 6th. Registration begins promptly at noon, with "Jingle Balls" slotted for 1:50 p.m. and the run itself starting at 2 p.m. Visit the above website for more information and photos of past year's events and RSVP to their Facebook event -- don't miss your chance to trim your tree and show off your holiday package on Saturday!