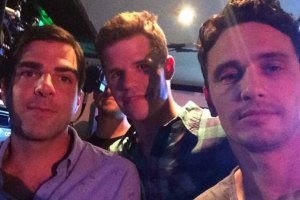 According to E! News, Carver (Desperate Housewives, Teen Wolf) plays Tyler, who begins a romance with the couple.

"They first meet in a club. The music is pumping. It's the nineties!" an unnamed source said."When Charlie's character questions Franco about having a boyfriend, Franco says, 'He'd like you, too.'"

The next scene, according to the source, is the three men naked in bed.

When Glatze decides to leave the relationship, the breakup is "disastrous and heartbreaking."