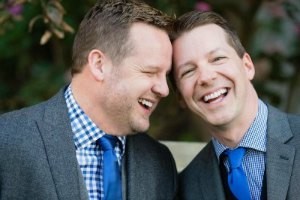 "Here's a #TBT photo of @scotticenogle and me getting married last week," Hayes tweeted along with a photo of himself and Icenogle wearing matching suits."Took us 8 years but we did it!"

According to PEOPLE, Icenogle is a Los Angeles-based music producer.

Hayes set off engagement speculation in October when he appeared on CBS' The Talk wearing what appeared to be a wedding ring on his left ring finger. According to RumorFix, Hayes wore the same ring during an appearance on The Ellen DeGeneres Show. During both appearances, Hayes did not divulge any details.

In a 2010 interview with gay glossy The Advocate, the 44-year-old Hayes, who is best known for playing quirky Jack McFarland for eight seasons on the hit NBC sitcom Will & Grace, confirmed he's gay by stating that he was "never in."

"I was so young," he told the Los Angeles Times. "It made me go back in The Closet [with the media] because I was so overwhelmed at 26 or 27. I didn't want the responsibility, I didn't know how to handle the responsibility of speaking for the gay community. I always felt like I owed them a huge apology for coming out too late. Some people in the gay community were very upset with me for not coming out on their terms.They don't stop to think about what's going on in somebody's personal life, and the struggles that they're having. It was all very scary.We got death threats. It was a really rough time for me, but I was also having the time of my life."