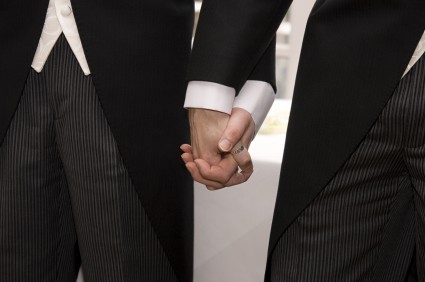 The new study looks at spending, LGBT populations and marriage rates to find the economic impact of passing same-sex marriage.

Chicago, IL - Same-sex marriage may have passed in Illinois just one year ago, but a new review of its long-term economic impact shows that gay weddings could help the state rake in more than $100 million extra cash annually.

That's according to a new study from the consumer finance site NerdWallet which looked at data from Gallup and U.S. Census records to find the long-term economic benefit of gay weddings.

After reviewing consumer spending on weddings, the self-identified gay population and overall marriage rates, researchers determined Illinois could add $101,507,822 in additional revenue every year. It was one of the 10 states nationally with the highest projected economic gains, with California -- because of its population -- tipping the scales at nearly $415 million annually.

What makes this study different is its focus on long-term gains. Many states where same-sex marriage is legalized, like Illinois, see an immediate economic boost the first couple years following because of pent-up demand. Additionally, NerdWallet notes those marriages are often planned quickly and performed at a courthouse, coming in far below Illinois' average cost of a wedding of $27,834.

The striking numbers come in almost a year-to-date from when Gov. Pat Quinn officially signed the law legalizing same-sex marriage on Nov. 20, 2014. It was supposed to take effect on June 1, 2014, three years to the day after Illinois established civil unions in 2011. However, a U.S. district court judge ruled on Feb. 24, 2014 that same-sex couples in Cook County -- and subsequently Chicago -- could marry immediately.

Now it looks like that ruling one year ago could add some skin in the game of Illinois' finances, as well as the nation's $51 billion wedding industry, which employs more than 800,000 people.

Should every state in America follow in Illinois' footsteps, Nerdwallet's study found that the U.S. could see at least $2.5 billion flow into local economies.