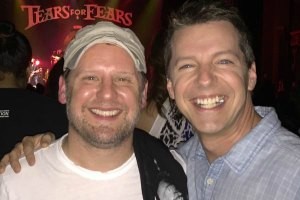 Hayes, who is best known for playing Jack McFarland for eight seasons on the hit NBC sitcom Will & Grace, this year joined the cast of the CBS comedy The Millers.

"Sean Hayes and Scott Icenogle have been together for eight years," Hayes' rep told RumorFix. "They are not yet married, but they have been engaged for quite some time."

"The newest member of #TheMillers has some big news to celebrate...RT to wish congratulations to @theseanhayes on his engagement!" The Millers tweeted.

Hayes set off engagement speculation when he appeared Monday on CBS' The Talk wearing what appeared to be a wedding ring on his left ring finger. According to RumorFix, Hayes wore the same ring during an appearance last week on The Ellen DeGeneres Show. During both appearances, Hayes did not divulge any details.

In a 2010 interview with gay glossy The Advocate, Hayes, 44, confirmed he's gay by stating that he was "never in."

According to PEOPLE, Icenogle is a Los Angeles-based music producer.