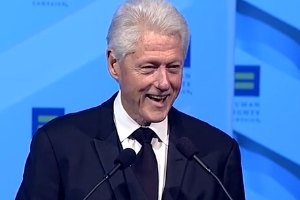 Clinton told the more than 3,000 people gathered at the Walter E. Washington Convention Center that they have a lot to be proud of.

"We can no longer live with being against somebody, or a group of somebodies, just because of who they are," he said. "You should be happy and proud about that.You've got a lot to celebrate. I've never seen a civil rights movement, at least in our country, move as far and as fast as your movement."

The progress, Clinton said, stemmed from "changing hearts and minds."

"One thing we have learned is no human heart is immune to an honest outreach. No one can forever ignore their personal experience. If you ask somebody who the most conservative member of the Bush administration was, most people say Dick Cheney. But Dick Cheney was for gay marriage [and] gay rights because of his daughter, because of his personal human experience," Clinton said, a reference to Mary Cheney, who is openly gay.

He added, "There are still some barriers that need to be brought down."

"All over the world, there are young people who still have to cower in fear of their governments, their leaders – and sometimes their families," Clinton said.

The room lit up when Clinton said he loved the HRC's initials, a reference to Hillary Rodham Clinton, a potential 2016 presidential candidate.

Clinton, who attended HRC's first national diner in 1997, lobbied – along with his daughter Chelsea Clinton – for passage of a marriage equality law in New York.