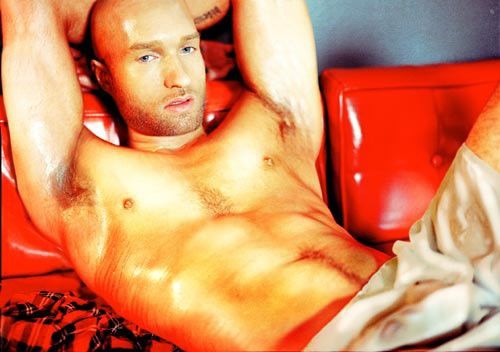 Chicago, IL - The weather in Chicago may be cooling down, but forecasters are predicting a HEATWAVE on Saturday, Nov. 15, when the Best Gay Cities boys are throwing their 24-hour, private LGBT indoor waterpark and hotel dance party at Key Lime Cove Indoor Waterpark Resort in Gurnee, Illinois. Partygoers will be treated to an over-the-top slumber party including 12-hour music and dance party featuring four fantastic DJs, fashions, eye candy and a performance by New York's infamous Cazwell, all while enjoying private access to an awesome indoor waterpark and hotel.

"Through social media and friends of friends, word has spread and the hotel said we have had reservations come in from all over the Midwest and as far away as Miami, San Diego and Seattle," Michael Snell and Derrick Sorles of Best Gay Cities told ChicagoPride.com.

The duo bought out the entire complex of Key Lime Cove for "Heatwave," which means a totally private party with no families and no children. Check-in starts at 3 p.m. Saturday and runs through 6, where the studly DJ #WET (aka Andrew Marks) of Sheboygan, Wisconsin will spin while folks arrive, mingle and get settled into their rooms. The waterpark party kicks off at 6 p.m. with Scarlet's Scotty T, followed by DJ Cody Domino, who also hails from Wisconsin but resides in Chicago and can currently be seen DJing at Charlie's.

At 11 p.m. Cazwell, the provocative gay singer known for his fun, sexy videos and raunchy lyrics (you've definitely heard "Ice Cream Truck," "All Over Your Face" and "I Seen Beyonce at Burger King ") takes to the stage, where he performs until 1 a.m. In addition to getting a taste of the songs on the singer's new album Hard 2 B Fresh, "Heatwave" partygoers can look forward to bumping into Cazwell in line for the slides or the bars throughout the party.

"I got my SPF and I'm ready to go -- they can expect the performance of a muthafuckin life time is what they can expect," he told ChicagoPride.com. "Chicago always knows how to turn up. Chicago is a music city so it's always been a good place to test out new music. It's actually the first place I ever performed 'Ice Cream Truck'."

Closing out the night is Scarlet's DJ Luna, who spins until the waterpark party closes at 3 a.m. Several satellite bars will be set up throughout the complex and partygoers will also have access to the restaurants, coffee shop, ice cream shop and gift shop as well as Key Lime Cove's spa services and their massive 10,000 square foot arcade (which features a small bowling alley). Add a fashion show by the fabulous Ramsey J Prince of J Prince Studios (featuring the male supermodel power couple Seth Fornea and Jared Bradford who travel the world showing up at all the best parties) and fun hosts including Austin Armacost, Traver Rains, Trannika Rex and Trixie Mattel and this is one party you definitely don't want to miss.

After 3 a.m. guests retire to their rooms to sleep (or not sleep, as they so choose), with the water park reopening the next morning at 9 a.m. for six more hours to swim or lounge by the pools and sip margaritas, bloody marys and pina coladas. In addition, there is also a fabulous Champagne Recovery Gospel Brunch planned, for which a separate $30 ticket is required. The brunch features a very special buffet, including coffee, tea, milk and endless champagne mimosas, as well as lively gospel music to get the morning started and a tongue-in-cheek drag show starring Milwaukee's Shawna Love and Harmony Breeze.

"Over the years we have done Disney's/Gay Days' Typhoon Lagoon party and loved it, but it's short, it's only 3-4 hours... then you have to drive back to your hotel," Snell and Sorles previously told ChicagoPride.com. "This is a 12 hour party all in one spot -- your room is upstairs, you can take a break whenever you want, you can swim the next day as well! You can remain 24 hours in one building! It's brilliant!"

Best of all, compared to many events, the duo says, "Heatwave" is not only fun but affordable. Of Key Lime Cove's 414 resort-style rooms and suites, 70% of them are sold out at time this is going to press. A few suites (one big and a couple smaller ones) remain available, but basic rooms will run interested parties about $200 for 2 people, plus an optional $75 a piece for the two guests that bring it to double occupancy. That means $100 a piece for two people, just under $91 a piece for three to a room, or $85 a piece for four will get ticket holders 24 access to the hotel as well as the 12 hour mega-dance party in the hotel and waterpark.

For single folks, Snell and Sorles have set up a room share page on Facebook to find roomies. For those who cannot or do not want to spend the night or get a room, admission is available for just the waterpark party portion of Saturday night from 6 p.m. - 3 a.m. for $85.

Until now, Key Lime Cove has never sold out the entire hotel and complex to any group before, reluctant to give up their reliably busy occupancy on Saturday nights year-round. While the hotel considered hosting private events, Snell and Sorles say they had never seen a plan solid enough to tempt them before Heatwave came along. While this test run will determine the party's future, its producers have no doubts about the event's success.

The event is 21+ and tickets can be purchased by calling 1-877-360-0403 -- you must say "'Heatwave' event in November" to have access to the rooms and event. More information can be found on the event's Facebook page, or at heatwavechicago.com.