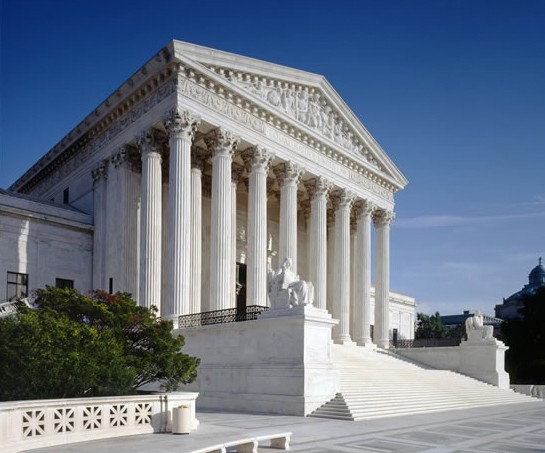 Washington, D.C. - The U.S. Supreme Court on Monday declined to take up the issue of same-sex marriage, a surprise move that brings marriage equality to five states and potentially opening the door for it in six others.

The decision applied to seven cases that had been spread across five states: Indiana, Wisconsin, Utah, Oklahoma and Virginia. Appellate courts for those states had all rejected gay marriage bans and those lower court rulings stand. But the appellate court rulings can also be applied to other states in their jurisdictions, including West Virginia, Wyoming, Colorado, Kansas, North Carolina and South Carolina.

"Any time same-sex couples are extended marriage equality is something to celebrate, and today is a joyous day for thousands of couples across America who will immediately feel the impact of today's Supreme Court action," said Chad Griffin of the Human Rights Campaign. "But let me be clear, the complex and discriminatory patchwork of marriage laws that was prolonged today by the Supreme Court is unsustainable. The only acceptable solution is nationwide marriage equality and we recommit to ourselves to securing that ultimate victory as soon as possible."

Evan Wolfson, president of Freedom to Marry, said, "[W]e are one country, with one Constitution, and the Court's delay in affirming the freedom to marry nationwide prolongs the patchwork of state-to-state discrimination and the harms and indignity that the denial of marriage still inflicts on too many couples in too many places. As waves of freedom to marry litigation continue to surge, we will continue to press the urgency and make the case that America – all of America – is ready for the freedom to marry, and the Supreme Court should finish the job."

Legal experts had largely assumed that the Court would this term hear one of the myriad appeals filed after lower court rulings overturned marriage bans across the country. But the rejections, made without comment, for the moment leave the matter in state hands.

With the bans lifted in these 11 states, 30 states and the District of Columbia would recognize gay marriage.

In Wisconsin, where the American Civil Liberties Union represented same-sex couples in the legal quest for marriage equality, celebrations were coming together as the work week got off to a start.

"Full equality is here to stay in Wisconsin," said U.S. Rep. Mark Pocan, D-Wisconsin. "The Supreme Court's rejection of Attorney General Van Hollen's appeal puts an end to a dark chapter in Wisconsin's history where many are treated as second-class citizens simply based on who they choose to love. Today's ruling reaffirms we are all equal under the law."