Facebook apologizes for forcing drag queens, others to use real names 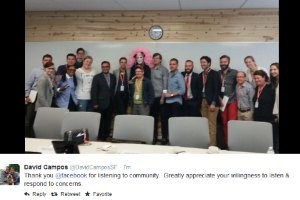 Facebook on Wednesday apologized for forcing drag queens and others to use their real names on the social network.

According to Gawker.com blog Valleywag, company representatives issued the apology at a meeting held at the office of San Francisco Supervisor David Campos.

"On Wednesday morning, Supervisor David Campos, the lead negotiator for a broad coalition of activists including drag queens, transgender people, performers, survivors of abuse and stalking, political dissidents and privacy activists announced a successful outcome to conversations with Facebook regarding their real name policy," Campos' office said in a press release.

Facebook became the target of those groups after it launched a crackdown against people using names other than their legal names, in some cases locking them out of their accounts. The social network said at the time that the policy "helps keep our community safe."

But SFist, which broke the story, noted several problems with the policy.

"In the case of the [Sisters of Perpetual Indulgence], these are not necessarily performers with fan bases but more a community of people who identify by these alternate names in public more often than not. In the case of drag queens, many already have fan pages but have found those to be less reliable ways of promoting themselves than friend networks, which in most cases they've taken years to build," the site wrote.

"Also there are the cases of people who have chosen to use alternate names, or pseudonyms, on Facebook precisely because they don't want to be found there by employers, family members, or nosey journalists."

Sister Roma, a queer nun with the Sisters of Perpetual Indulgence, was among those outraged by the policy.

"I want my friends to find me," Sister Roma told SFist. "I detest the idea of having a fan page. I'm not fucking Britney Spears. I have friends, not fans."

Seattle Gay Scene described Fan Pages as "the most useless thing on Facebook."

"Unless you have thousands of dollars to shell out for ads to get your page boosted for views, Like Page posts get lost among a sea of Instagrams and viral trends," the site wrote.

"The drag queens spoke and Facebook listened!" Campos said. "Facebook agreed that the real names policy is flawed and has unintentionally hurt members of our community. We have their commitment that they will be making substantive changes soon and we have every reason to believe them.Facebook apologized to the community and has committed to removing any language requiring that you use your legal name. They're working on technical solutions to make sure that nobody has their name changed unless they want it to be changed and to help better differentiate between fake profiles and authentic ones."