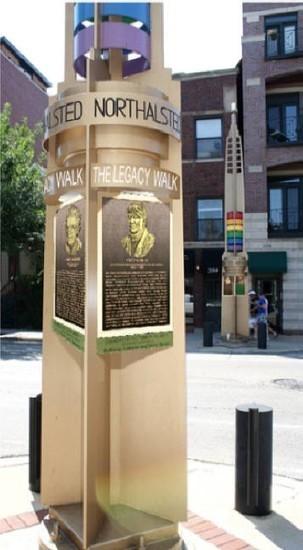 Chicago, IL - October is officially LGBT History Month and this year marks its 20th anniversary. LGBT History Month celebrates the chronicle of the Lesbian, Gay, Bisexual and Transgender (LGBT) community and its struggle for identity, rights and equality.

In 1994, Rodney Wilson a Missouri high school teacher, conceived the idea of this designation and in subsequent years, educators and community leaders endorsed the observance.

October was selected because public schools are in session and existing traditions, such as Coming Out Day (October 11), occur that month.

1962: Illinois became the first state in the nation to decriminalize homosexuality. The Prairie State repealed its sodomy laws nearly a decade ahead of the remaining 49 states.

1970: The first Chicago Gay Pride Parade set out from Bughouse Square and ended with speeches and a circle dance around the Picasso statue downtown.

1979: Thirty-five years ago, activists gathered on the National Mall to commence the National March on Washington for Lesbian and Gay Rights on Oct. 14.

1984: On March 14, the U.S. Court of Appeals for the 10th Circuit found that portions of an anti-gay conduct statute affecting teachers infringed on First Amendment rights in National Gay Task Force v. Board of Education of the City of Oklahoma City.

1994: On Dec. 6, the American Medical Association stated its opposition to reparative/conversion therapy with regard to homosexuality, as homosexuality is not a mental disorder.

1999. On Dec. 20, in Baker v. Vermont, the Vermont Supreme Court ordered legislators to craft a statute that would grant same-sex couples identical rights to those of married couples.

2004: Same-sex marriages commenced in Massachusetts on May 17, based on Goodridge v. Department of Public Health.

2012: The Legacy Walk, an outdoor "museum walk" recognizing the contributions lesbian, gay, bisexual and transgender (LGBT) people have made to world history and culture, was dedicated in Chicago's Boystown neighborhood.