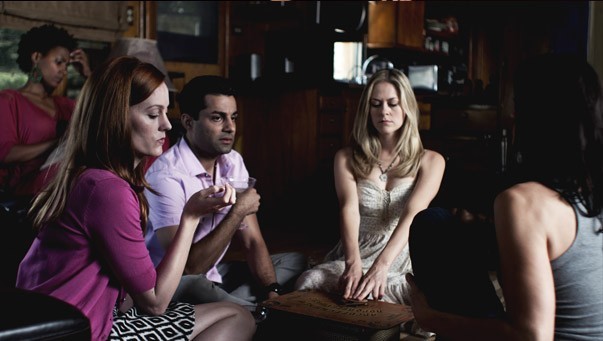 Combining elements of revenge killing for past hurts, ghost stories, as well as references to classic horror, and a healthy dose of pansexual humping, Crazy Bitches gets most of it right. It keeps us guessing as each of the characters begins dropping in ways specific to their personality. Fashion obsessed Belinda gets a stiletto heel to the eye, Taylor chokes on her pearls, hair hung-up Princess is scalped, skin color conscious BJ discovers too late that there is acid in one of his cream tubes, and so on. Be sure to pay close attention to the sub-story involving Alice's philandering husband Eddie (David Fumero). Crazy Bitches refreshes a genre that was getting tired and tiresome.

Reeling: The Chicago International Gay and Lesbian Film Festival opened on Sept. 18 at the Music Box Theater on Southport and runs for a week through Sept. 25. The majority of the Reeling screenings take place at the Landmark Century Cinema in the Century Mall on Clark Street, with others being held at Chicago Filmmakers on Clark St. in Andersonville. Reeling schedule and tickets available at reelingfilmfestival.org.