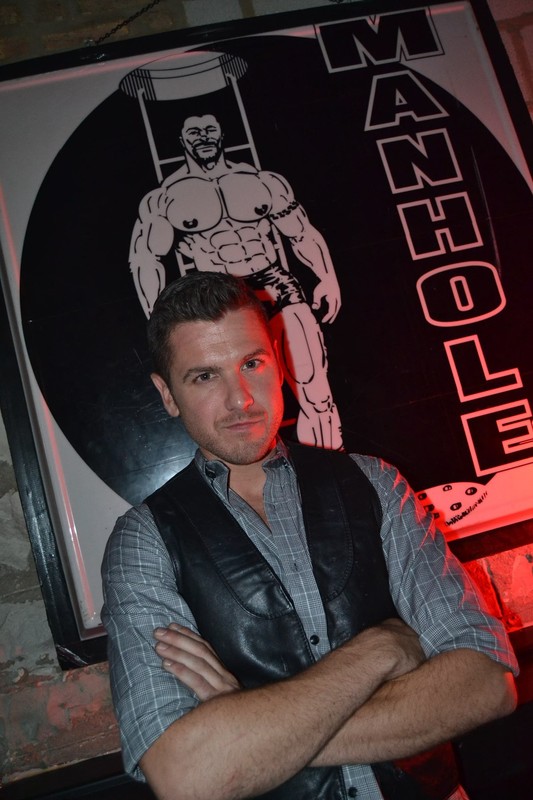 ChicagoPride.com was there as Manhole makes its triumph return to North Halsted.

Chicago, IL - They say you can't go back again, but last night LKH Management - the team behind the successful Boystown bars Hydrate, Elixir, Replay and Halsted's - took the gayborhood back in time as they brought the legendary leather nightclub Manhole back to Boystown.

It may have been the vintage skin flicks playing on TV sets throughout the space recently occupied by Spin Nightclub at the corner of Belmont and Halsted, or it may have been the crowds of men clad in harnesses, jockstraps and their leather finest who poured in to welcome the old haunt back, but down in the hole it felt like a trip back to the Boystown of the 90s.

"Opening night was incredible," AK Miller, who helped revive Manhole with the infamous themed nights at Hydrate and is now taking the lead to run the new club, told ChicagoPride.com. "I am so proud of the work that we have done to provide something new, different and necessary. It is my and Tyler [Rathje]'s hope that this venture will open the doors for many talented people who do not fit into many of the stereotypes of Boystown nightlife. We are excited to have the opportunity to open doors for many DJ's and performers in the future"

The VIP reception started in "the Den," an upstairs area of Manhole that's slated to open daily at 6 p.m. -- "play upstairs at the den before you head down into the hole," a poster advertises. "Pool. Darts. No Attitude." The U-shaped space is familiar to veterans of Boystown as the small upstairs bar at Spin by the DJ booth, where it still affords views of the basement dance floor below. Patrons enter into a space with the bar, while pool and darts are set up at the far end of the opposite room, leaving plenty of space for Manhole's new patrons to mingle, chat and enjoy the atmosphere before, or instead of, going to down the hole.

The hole below opened to the public at 10 p.m., at which point the old basement dance floor of Spin (most-recently Chloe's) filled with scruffy men eager to shed their shirts, loosen their jeans and make themselves at home. The space is darker now, with sleek black booths lining the walls of the familiar open dance floor layout. Artwork featuring the muscle-bound, Tom-of-Finland-esque men and vintage ads for bars like the now-closed The Eagle fill the space as well as a new mural of scruffy-faced men on the dance floor.

The lightshow and pounding bass from the DJ booth positioned on stage drew dancers to the floor and some, like a young man clad in leather chaps, to the box. DJ Jim Belanger, a staple at the original Manhole, "baptized the space," Miller described, "with a mix of decades of dance music, tying together generations of the gay community." The less adventurous dressers mingled with those undressed to the nines and into the night Manhole was welcomed back to Halsted. (This is the last time patrons will be able to enter the hole in such a casual fashion -- like the back dance floor at the original Manhole, admittance to the basement will only be given to those in theme or shirtless from Thursday-Sunday).

"I think Manhole is going to be a great addition to the neighborhood," Mark Liberson told ChicagoPride.com. "We're really excited about it and we hope everyone else will be too."

From the looks of last night -- Boystown is definitely excited.

Opening weekend continues tonight with the new Manhole's first hired resident, DJ Laura B, whose eclectic beats have fueled dance floors across Chicago for years. Saturday night features Chicago's legendary DJ Matthew Harvat, the nightlife pioneer known as Circuit MOM whose parties and events are emulated by producers everywhere and who MIller calls "a leader and mentor in both the GLBTQ community and beyond,"

"That corner spot is the gateway leading in to Boystown!" Harvat, who has many memories of the original Manhole, told ChicagoPride.com. "I think what they are doing with Whiskey Trust and now Manhole is exactly what the strip needs. There's definitely a market for live bands in Boystown and if they make Manhole a bit darker, dirtier and hold up their end of the deal with deep house music, a dress code enforcement and allow AK Miller (the manager) to do what he does best -- create unique and sexy nights that have that sly, 'what happens in Vegas, stays in Vegas' feel, that corner will come alive again and offer a new experience for the younger audience and a welcome reboot to those of us that actually like the darker side."

"I am honored to be chosen as the very first Saturday night DJ to help launch the new space and will definitely draw on the past, but I am working hard to create a new deep house vibe and kick this thing off with a bang!" he continued. "Come see us!"

ChicagoPride.com first reported on Aug. 21 that LKH Management would assume the operation and management of Whiskey Trust and Chloe's, which replaced Spin Nightclub on June 19.