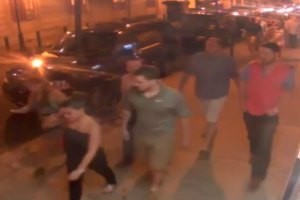 Philadelphia, PA - An assistant coach on Thursday resigned from his job at a Roman Catholic high school over his allegedparticipation in the brutal beating of a gay couple in Philadelphia's downtown Center City neighborhood.

According to the men and several witnesses, the couple, together over a decade, was approached by a group of 10 to 12 men and women last Thursday night as they made their way to dinner. One of them asked the men if they were boyfriends. When one of the men answered "yes," the group rushed them and began punching and kicking the men. As a result of the beating, one of the victims, 28, was hospitalized for more than three days and had to have his jaw wired shut.

"Violence against anyone, simply because of who they are, is inexcusable and alien to what it means to be a Christian," Archbishop Charles Chaput said in a statement.

Police received help in identifying the suspects from online sleuths. Shortly after officials released surveillance video of the suspects, social media users used details found in various posts to track down where the group had dined and other information.

No arrests have been made, but police have spoken to some of those seen in the video. According to Philadelphia's NBC10, attorneys who represent some of the suspects claim that they were attacked first.

Chaput said some of men and women seen in the video were former students at Archbishop Wood.

"A key part of a Catholic education is forming students to respect the dignity of every human person whether we agree with them or not," Chaput said in a statement.