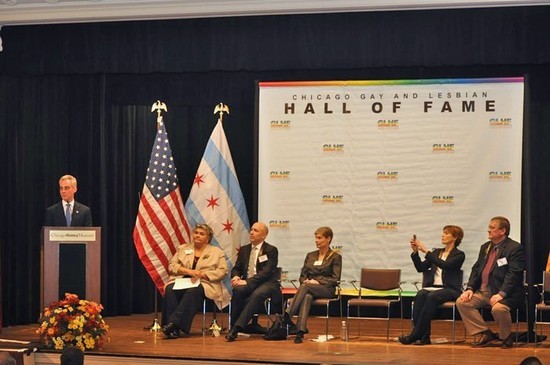 photo credit // anthony meade
Chicago, IL - Fifteen individuals and organizations will be inducted Nov. 12 into the Chicago Gay and Lesbian Hall of Fame, the country's only known government-sponsored hall of fame that honors members of the lesbian, gay, bisexual, and transgender (LGBT) communities.

The inductees were selected by a committee composed of former inductees, which reviewed nominations submitted by members of the public. The names were released by Friends of the Chicago Gay and Lesbian Hall of Fame, a section 501(c)(3) nonprofit organization.

The chosen nominees will be inducted at the Hall of Fame's annual ceremony, which will take place from 5:30 p.m. until 7 p.m. on Wednesday, Nov. 12, at the Chicago History Museum, 1601 N. Clark St., Chicago. A reception begins at 5:30 p.m., and the program is scheduled for 6 p.m. The event is free and open to the public.

"This year's inductees, like our complete roster since 1991, represent a swath of LGBT achievement in a variety of fields," said Gary G. Chichester, co-chairperson of the Friends organization and a longtime leader in maintaining the Hall of Fame. "Each year, the Hall of Fame is able to spotlight some of the many who have made contributions to their own communities and to the city as a whole."

"We welcome the 2014 inductees' addition," said Israel Wright, executive director of the Friends organization. "It continues to show how the important contributions from our LGBT communities and from our friends pave the way for the future. It is humbling to recognize each inductee's special efforts to create change in ways that affect us all so greatly."

Hall of Fame inductees fall into one of three categories: "individual," "organization," or "friend of the community." Nominees represent all of Chicago's sexual-minority communities, including LGBT Chicagoans, past, present, living, and dead, as well as those who have supported or assisted them.

Gerald Arpino ( 1923—2008 ) , co-founder of The Joffrey Ballet, which is celebrating its 20th year in Chicago, for his more than 50 Joffrey years as dancer, choreographer, and company director.

Jennifer Brier, 43, a historian of LGBT communities and of AIDS, for her 11 years of Chicago work, including co-curation of the 2011 Chicago History Museum "Out in Chicago" exhibition.

Terry Cosgrove , 61, president and CEO of Personal PAC and a 1970s LGBT activist, for his 25 years of advocacy and political consultancy in behalf of women's reproductive choice rights.

Christina Kahrl , 46, the nation's first openly transgender sports writer and a co-founder of the Baseball Prospectus think tank, for that and her seven years of pro-transgender Chicago activism.

Edward Mogul , 68, lawyer, teacher, and president of the Illinois Academy of Criminology, for LGBT advocacy and for legal and financial help to LGBT groups over more than 40 years.

Lisa Marie Pickens , 51, a co-founder and board president emeritus of Affinity Community Services, for more than 25 years of activism as an open African American lesbian.

Debra Shore , 62, an openly lesbian Metropolitan Water Reclamation District of Greater Chicago commissioner since 2006, for her 32 years as a conservationist and political organizer.

Ross A. Slotten, M.D. , 60, a physician, medical faculty member, and biographer, for 30 years of providing supportive care, innovative treatments, and expert advice in the fight against AIDS.

Bennet Williams ( 1947—2001 ) , a community organizer, for almost 20 years as an HIV-positive man advocating and educating about HIV and human rights, especially with African Americans.

Out & Proud in Chicago, a WTTW initiative, for producing television documentaries about Chicago LGBT history and personages, including its award-winning 2008 namesake production.

"Friend of the Community" Category

Lucretia Clay-Ward, 49, an HIV/AIDS survivor, counselor, and advocate, for 13 years of HIV-prevention outreach and education, especially among youth, sex workers, and substance abusers.

Heather A. Steans, 51, an Illinois state senator, for six years of legislative representation, including service as chief Senate sponsor of the marriage-equality bill that passed in 2013.

The Chicago Gay and Lesbian Hall of Fame was established in 1991 under the auspices of what was then the Chicago Commission on Human Relations' Advisory Council on Gay and Lesbian ( later, Lesbian, Gay, Bisexual and Transgender ) Issues, a municipal government agency. At the end of 2011, the advisory council ceased to exist after a commission restructuring, and the Friends organization succeeded it as caretaker of the Hall of Fame in partnership with city government.

The Hall of Fame's purpose is to recognize the achievements of LGBT Chicagoans, their contributions to the development of the city, and the help they have received from others. In 2014, it holds its 24th annual induction ceremony and continues to represent an official recognition by Chicago's government of the city's LGBT residents and their allies.

Those selected for the "individual" category are or were members of Chicago's LGBT communities and have made single far-reaching or significant long-term contributions to the quality of life of those communities or of the city as a whole. Those in the "organization" category are LGBT businesses and nonprofit groups that have done likewise. "Friends of the community" are non-LGBT-identified individuals and organizations that have contributed to the quality of life of the city's LGBT communities.