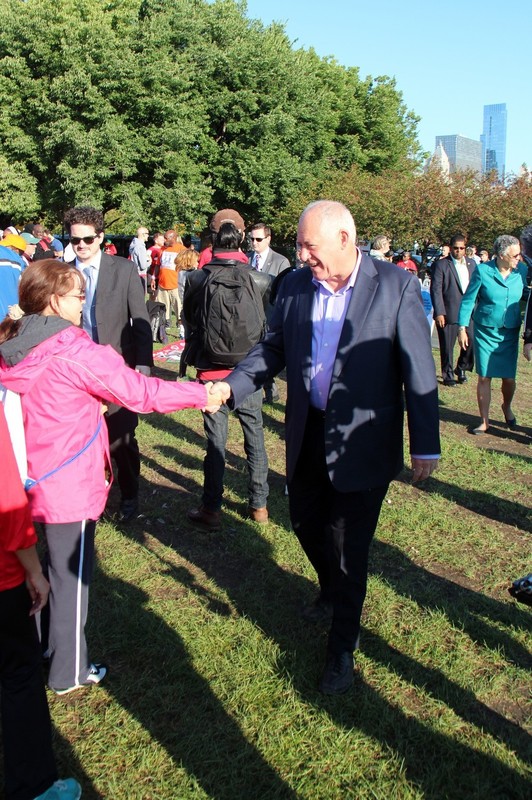 Chicago, IL - More than 3,000 runners, walkers, volunteers raise over $380,000 for 32 organizations that support people living with HIV/AIDS as part of the 13th annual AIDS Run & Walk Chicago on Sunday.

Illinois Gov. Pat Quinn thanks runners and walkers before reiterating his commitment to HIV/AIDS service in Illinois.

The event, one of the city's high-profile fundraisers to combat HIV/AIDS, took participants in the event's 10K run and 5K run and walk along Chicago's lakeshore, starting and finishing at Arvey Field in Grant Park.

Morning festivities also included a performance by the Chicago Human Rhythm Project in celebration of Global Female Condom Day. Participants Danced4Demand along with the ensemble to warm up and increase awareness and availability of female condoms, and Governor Quinn marked his "demand" for female condoms on a Citywide map where attendees want to see more availability of this prevention device.

The 5K winners were Alyssa Bracy and Jeremy Solomon, and the 10K winners were Thomas Lynch and Lindsay Young. A full list of participant finish times is available at aidsrunwalk.org.

After the race, runners and walkers viewed the stoic AIDS Memorial Quilt panels on display, and many in attendance participated in free HIV screening at testing trucks in Arvey Field.

Donations to AIDS Run & Walk Chicago will be accepted through the end of the year. To donate or learn more, visit aidsrunwalk.org or call 312-334-0946.