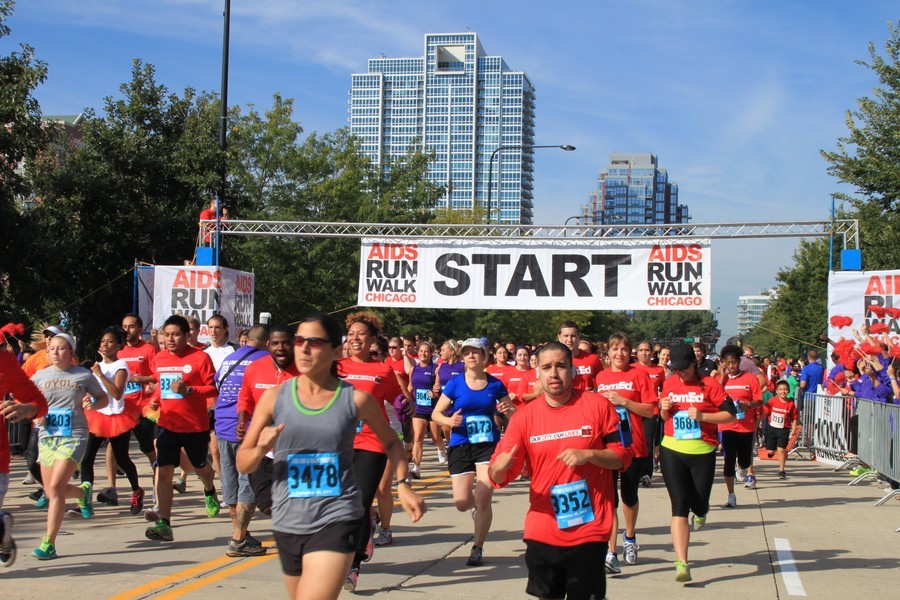 Chicago, IL - More than 3,500 Chicago-area residents will lace up their running shoes to take action in the fight against HIV/AIDS during the 13th annual AIDS Run & Walk Chicago on Sunday, Sept. 14.

The event, one of the city's high-profile fundraisers to combat HIV/AIDS, will kick off at Arvey Field in Grant Park with 5K and 10K courses winding along the lakeshore.

"For many years, AIDS Run & Walk Chicago was held in Arvey Field in Grant Park—so this year is a bit of a homecoming for many of our participants," AIDS Foundation of Chicago's Director of Fundraising Events Rhett Lindsay told ChicagoPride.com. "The spectacular skyline views from this area and the course routes make for an enjoyable and memorable day."

Opening ceremonies begin at 8:10 a.m. and morning festivities will also include a performance by the Chicago Human Rhythm Project in celebration of Global Female Condom Day. Participants are encouraged to warm up before the race while they "Dance for Demand," to increase awareness and availability of female condoms.

Panels from the AIDS Memorial Quilt will also be on display, and free HIV testing will be available on site.

After the race, run participant Armando Ramirez has planned a special marriage proposal flash-mob performance and announcement to his longtime boyfriend of six years, Joel Guzman.

Funds raised through AIDS Run & Walk Chicago will benefit programs and services for the AIDS Foundation of Chicago and 31 other metropolitan organizations that provide life-saving services to people living with HIV/AIDS.

Lindsay told ChicagoPride.com that registrations and donations are comparable to previous years.

"As always, we accept race day registrations and donations," he added. "The AIDS Run & Walk Chicago website features a live donation calculator on the homepage which gives us an actual tally of funds raised."

Since it was established in 2001, AIDS Run & Walk Chicago has netted more than $4.5 million to battle the epidemic.

Race day registrations begin at 7:45 a.m. For more information visit aidsrunwalk.org and click on the 'Race Day' tab for all the event day details.

Editor's Note: ChicagoPride.com is a media sponsor of the AIDS Run & Walk Chicago.