Out in The Park returns for third year of rides, fun and fundraising 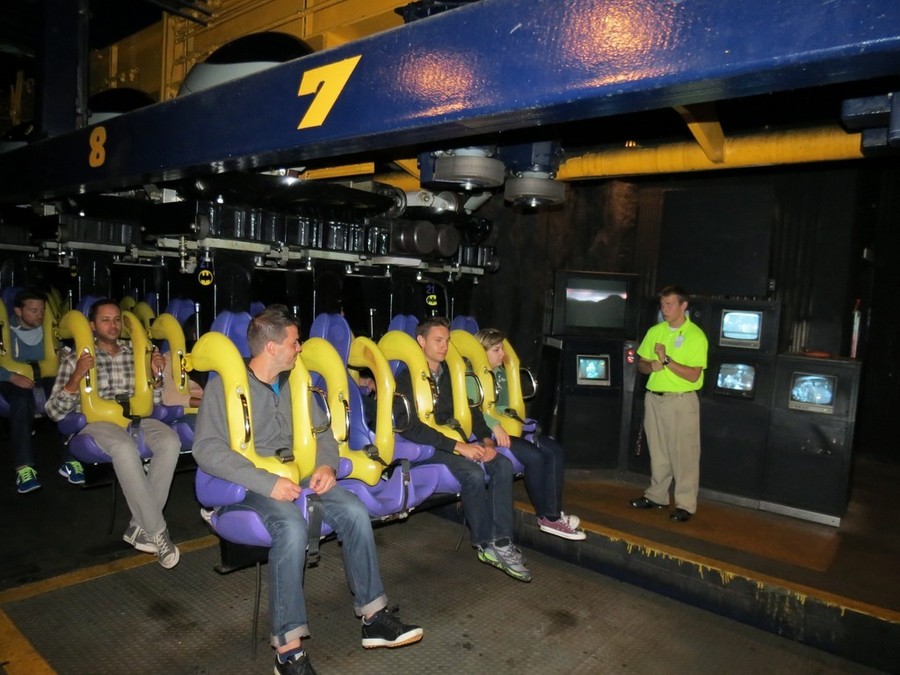 Out in the Park, an exclusive private party at Six Flags Great America, returns Saturday, Sept. 13

Chicago, IL - Last year's Out in the Park brought about 4,500 LGBT folks and their allies together from across the Midwest to raise nearly $11,000 for the Test Positive Awareness Network while they enjoyed a private, after-house party at Six Flags Great America in Gurnee, Illinois. Next Saturday, Sept. 13, the boys of BestGayCities.com are excited to host their third year of what is already a favorite end-of-summer event, saying that they've learned what the people want: music, rides and a gay ol' time.

After hearing that some folks didn't attend their first Out in the Park back in 2012 because they didn't like rides, BestGayCities' Michael Snell and Derrick Sorles added an entertainment portion including performers Isaiah Grass, Jess Godwin and Eli Lieb and hourly meet-ups like Bear beer bust and Lesbian libations.

"In the end, everyone there just wanted to ride rides, grab a drink or two and dance a bit," Snell and Sorles said. "Even if you don't like rides it's like a gay pride celebration in the park. The bars are busy and you can dance and just roam around and see old friends or make some news ones."

This year, the duo has streamlined the entertainment. Scarlet's DJs will be spinning and their music once again pumped throughout the whole of the park while hostess Trannika Rex and the boys of Scarlet return to dance, vamp, play and generally rule the stage in Hometown Square. Handsome designer Traver Rains, one-half of the famed design duo Heatherette, will also be on hand to show off some hot models and even hotter fashions.

The show culminates with a performance by the one and only, the incomparable drag queen comedienne Lady Bunny. The international entertainer and diva extraordinaire known for her pop culture comedy and fabulous DJ skills takes center stage next Saturday, and you don't want to miss it.

"Derrick and I have known Lady Bunny for about 15 years," Snell said. "And we have always wanted to do an event with her. We had a little bigger budget this year and could afford to raise the bar a bit. We hope that every year, the event continues to grow. Once we get to about 9,000 guests, Six Flags is ready to give us a whole day!"

The event will once again feature 5-6 spots scattered throughout the park where anyone 21+ can purchase drinks throughout the night. Because Out in the Park is an exclusive, ticket-holder-Six Flags' newest, record-breaking attraction: Goliath. The new wooden roller coaster premiered this year, making Six Flags the park with the most wooden rollercoasters, and claimed three records: the ride's 180 foot drop at 85° is both the steepest and longest in the world for wooden roller coasters and at 72 miles per hour, Goliath is also the fastest wooden roller in the world.

"One of the best elements of this event is that it is closed to the general public and this year our event piggy-backs a daytime corporate buyout so our attendees will be entering an EMPTY PARK!" Snell explains on the event's Facebook page. "The LGBT community, their family, friends and supporters can enjoy the park with little to no lines and without homophobic hassles from anyone. It's like a Fall Gay Pride Celebration with even MORE amusement and entertainment!"

The previous event ends at 6 p.m., at which point the staff gets Six Flags ready for Out in the Park (last year they actually opened the gates about 15 minutes early). This year the event is moved back one hour, starting at 7 p.m. and raging until midnight. The duo hopes this hour changes will give everyone a bit more time to back to Milwaukee or Chicago to catch last call. In Chicago, Charlie's will host GLO, the Official After Party featuring beats spun by DJ Cody Domino. Everyone with a Six Flags ticket gets into the party for free!

Advance tickets are still available for $39, which includes free parking, through Sept 7 -- the next day prices go up to $41. That price remains up until the morning of the event if you buy your tickets online, but those who wait to purchase at the gate will pay $50. You can get your tickets online at www.GaySixFlagsChicago.com. In need of transportation? Both Charlie's in Chicago and DIX in Milwaukee are organizing buses down and the duo reports that someone in Madison is working to get a bus together as well.

Out in the Park has always benefited a local Chicago-based charity, Chicago House in 2012 and TPAN last year, but this year's event will benefit the AIDS Research Center of Wisconsin (ARCW), with the duo hoping to attract a larger crowd from our neighbors to the north.

"Looking at the purchasers credit cards, we realized hardly anyone from Wisconsin was coming to the event -- which is crazy, Milwaukee is actually a bit closer to the park, than Chicago," Snell said. "So we started looking for a charity in Wisconsin and chose ARCW for this year. ARCW is a nationally recognized organization, servicing thousands of HIV patients across with Wisconsin with health and dental care, as well as housing and other social services."

"We are hoping that by giving the money to a Wisconsin organization, more people from Wisconsin will support the event this year, and get the attendance to grow," he continued. "Next year, we should be able to write 2 checks hopefully, on to an Illinois group and one to Wisconsin."

Don't miss the third year of this growing Midwest tradition and check back to ChicagoPride.com soon for more about the duo's Heatwave event, an over-the-top and private gay slumber party taking over the nearby Key Lime Cove Waterpark and Resort this November.