Baptist teacher justified raping of gay man as an attempt to turn him straight, man claims 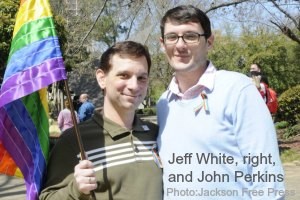 Walls, Mississippi - A gay man has accused his former Baptist teacher of sexually abusing him for three years in an attempt to turn him straight.

Jeff White, 32, alleges that after coming out to his parents at the age of 14 they enrolled him in a Christian ministry program that promised to "cure" him of his sexual orientation.

According to White, he attended weekly "counseling" sessions from 1996 to 1999 led by teacher Steve Barnes. During the sessions, Barnes routinely raped the teenager in an attempt to convince him that being gay was more painful than suppressing his sexual orientation.

"He would rape me because I was gay and because it would make me hate men and make me change," White told gay weekly The Washington Blade.

"After growing older and witnessing so many who are still harmed by the church and by efforts to correct homosexuality through traumatic and damaging tactics like the ones used against me, I finally realized that it is my duty to stand up against those who have harmed me," said White in a statement provided by NCLR. "By speaking out against the wrongdoings that were committed within the walls of Bethel Baptist School, I hope to shed light on the darkness that is so easily hidden within the church, and to help ensure that no one else suffers the pain that I had to endure."