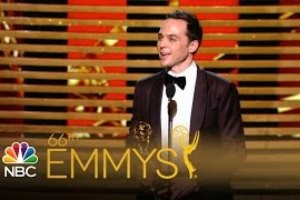 Parsons won the Emmy for Outstanding Lead Actor in a Comedy Series for his work on the CBS sitcom The Big Bang Theory.

In accepting his award, a humble Parsons said "there's no accounting for taste."

"Wow, oh my god, I don't believe this," he said. "To say that I watch your work and I feel inspired is a bit of an understatement."

"And this is all a long way of saying, there's no accounting for taste," he said. "And that through a lot of good fortune I stand up here tonight."