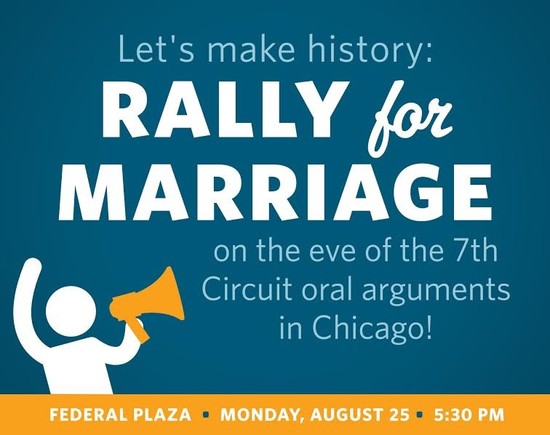 The 7th U.S. Circuit Court of Appeals on Tuesday will hear arguments in a combined appeal by Indiana and Wisconsin officials.

Chicago, IL - On Aug. 25th, the evening before the Chicago-based 7th Court of Appeals hears arguments in the cases challenging Wisconsin and Indiana's ban on gay marriage, advocates from Indiana, Wisconsin and Illinois will rally in Chicago in support of the freedom to marry.

"It's imperative that we show the courts that here in Indiana, we believe freedom means freedom for everyone," said Kyle Megrath of Hoosiers Unite for Marriage, one of the groups behind the rally. "It wasn't that long ago when it seemed as though same-sex couples in Indiana would never garner the respect that they deserved. Now in just a few short months since our campaign launched, we're on the verge of putting the painful chapter of our marriage ban behind us and creating a state where we embrace all Hoosiers—regardless of who they love."

Hoosiers Unite for Marriage along with Wisconsin Unites for Marriage planned state-wide events before scheduled bus tours to Chicago. The combined marriage equality rally will start at 5:30 p.m. near the Dirksen Federal Building at Dearborn and Adams in downtown Chicago.

On Tuesday, the 7th Court of Appeals will hear oral arguments in marriages cases from Wisconsin and a consolidated set of cases from Indiana.

Since the end of the year, same-sex marriage bans also have been overturned in Idaho, Utah, Colorado, Texas, Oklahoma, Arkansas, Tennessee, Florida, Kentucky, Virginia, Ohio, Michigan, Indiana and Wisconsin. In Utah, Oklahoma and Virginia, federal appeals courts already have weighed in in favor of same-sex couples, sending those cases to the Supreme Court.