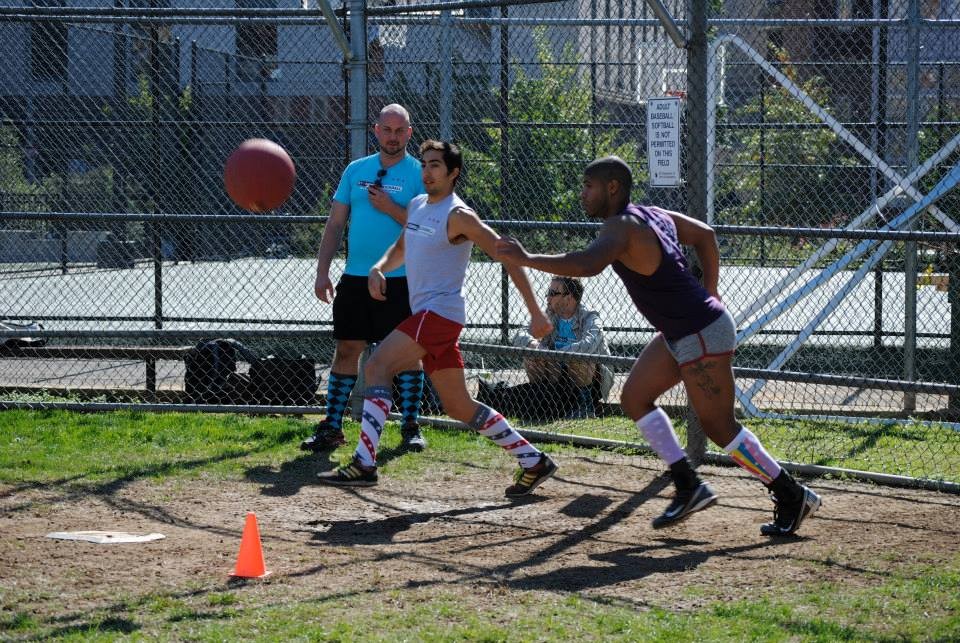 Chicago, IL - Are you ready for some kickball, Chicago? Four years ago the Stonewall Kickball league originated in Washington D.C. with the mission of creating a fun, inclusive sports organization that centered around building a community and raising money for local nonprofits. This fall, the LGBT and ally based organization is coming to Chicago and registration is currently open.

"It started really with a group of friends who just wanted to play kickball for fun and make a difference in the community," Patrick Crosson, a Chicago transplant from the DC area who's bringing Stonewall Kickball to the Windy City, told ChicagoPride.com. "They decided to play to help support the D.C. Center as their charity and have expanded ever since. I think the founders realized what a great impact we can have as a group in the community."

There are now 24 teams that play in the original Sunday league and they've expanded to multiple nights of play and other sports, including dodgeball, bocce and darts. The organization consists of hundreds of players who raise thousands of dollars each season for their charity. In addition, the league has spread to several other locations around the country, mostly, Crosson says, as a result of league members moving and missing their favorite D.C. tradition.

"The community that's built in the league was a huge part of what became my social life," Crosson said. "I still have really good friends in D.C. because of joining kickball."

When Crosson moved to D.C. in 2011, he joined the league as a "free agent" looking to get to know people and wound up a team captain and kickball diehard. A meeting and event planner, Crosson moved to Chicago for work two years ago and found that he, like so many others, missed the league and everything it did.

"So, in March of this year I decided I was going to spread the league here," he said. "The league is unique in the fact that our mission is to support our local charity of choice. We can only accomplish that support together as a community... so you find that the teams become almost like a family. You end up spending lots of time together both on and off the field."

Now Chicago will be added to the list of leagues in Philadelphia, Raleigh, Greensboro and Charlotte as well as Providence and Pittsburgh, which are set to have leagues established soon. The threads that weave all these cities' leagues together are fun, community and charity -- with each working to raise money for a local non-profit. Here in Chicago, Crosson chose to partner with Fred Says, saying that their mission "to help ensure teenagers with HIV can receive the care and services they need to lead healthy and productive lives" speaks for itself.

"We recognize that the younger generation is our future, so any way we can help support this mission we will" Crosson continued. "I think their creativity and passion will mix well with the energy and passion that we as a league can bring to the table. Already they've been awesome partners in helping to support our formation... I'm particularly excited to see what we can do together over the next couple of years as we expand and grow as a league. We'll hold events all throughout the year to help raise money for Fred Says and eventually as we expand begin volunteering in the community outside of sporting activities."

The league runs on Sundays from 1 - 5 p.m., September 14 to October 26, with the teams facing off on the Waveland Softball Fields, just east of Boystown. Registration is $40 per player (with no team registration fees) and open to everyone! While the league is generally LGBT-dominated, allies are prominent as well.

"I think the greatest part of seeing Stonewall come together is how diverse we end up being, Crosson said. "The league is definitely meant to be more fun than competitive. We don't care if you've never played kickball before. It's more about the formation of the community, meeting new people, supporting our charity and sponsors, and yes... playing a little bit of kickball!"

To register for the Fall 2014 season, visit https://gopride.com/Zas7/ and click on Kickball under Leagues. Any additional questions can be sent to chicago@stonewallkickball.org.