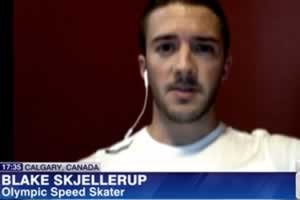 Cleveland, OH - Out Olympian Blake Skjellerup is in Cleveland, Ohio to compete in the 2014 Gay Games 9.

Nearly 8,000 athletes representing more than 65 countries have descended on Cleveland and nearby Akron to participate in the event's nearly 40 sporting events.

Skjellerup came out gay in 2010, after he competed for New Zealand at the 2010 Winter Olympics, finishing 16th in short track speed skating.

"I believe so strongly in the power of and movement of sport," Skjellerup told Cleveland daily The Plain Dealer. "It brings people together and it's really great. The Gay Games coming to Cleveland can really help open some people's minds and change perspectives, especially at a time where same-sex marriage isn't yet legal [in Ohio], hopefully it can open that conversation. The conversation is already there, but it's about getting that legislation through."