Eureka Springs, Arkansas hosts reception to honor gay couples who married in May 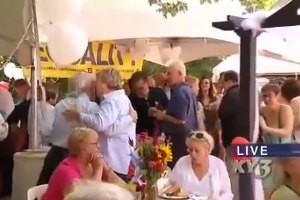 The event was held at Farm Table Fresh restaurant and was made possible by the generous donations of more than 40 restaurants, hotels and retailers.

"Wedding receptions are not something that gay couples are used to," Michael Walsh, an organizer of the event, told KY3 News. "They've been excluded from that cultural ritual for a long, long time. So we wanted to make sure we'd have a public wedding reception for them and celebrate their joy."

Roughly 500 couples, most of them in Pulaski County, exchanged vows after a state judge knocked down the state's 10-year-old voter-approved constitutional amendment and a 1997 law prohibiting gay couples from marrying. The weddings came to a halt when the state Supreme Court issued a stay as the state pursues an appeal.