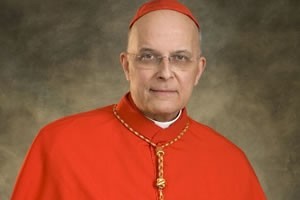 "We are afraid that the institutions that perform the works of mercy that have been integral to the church's mission for centuries will be forced to become, effectively, government institutions, given permission to exist only if they do not act as Catholic. At stake are Catholic hospitals, Catholic universities and Catholic social services, precisely as Catholic," he wrote.

George claimed that "the imposition of a definition of marriage that destroys the natural meaning of marital union" is a test case for religious liberty.

"The law now holds that men and women are interchangeable in marriage, as if children did not need both a mother and a father to be born and raised with some security. These are laws that mark societies in decline, demographically as well as morally."

Americans should be "concerned that we are on the wrong side of what nature teaches us and therefore, at least in the long run, headed for historical failure as a society," he added.