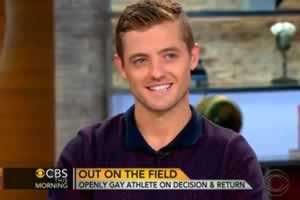 Hollywood - A television comedy inspired by Robbie Rogers is under development.

Last year, Rogers announced he's gay and his retirement from professional soccer. But within months – after the feared backlash failed to materialize – Rogers returned to the sport, joining the Los Angeles Galaxy.

The series is being developed by Storyline Entertainment, the production company run by Craig Zadan and Neil Meron, both of whom are openly gay. Zadan and Meron produced the last two Oscar telecasts and many of their projects include LGBT themes.

"Very excited and fortunate to be working with so many great people on this project!" Rogers tweeted to his more than 232,000 followers.