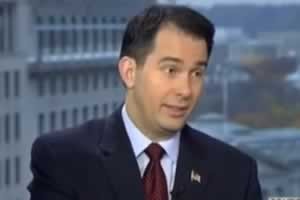 "I don't think the Republican Party is fighting it," Walker told the AP at a gathering of the National Governors Association in Nashville.

"I'm not saying it's not important," said Walker, a possible 2016 GOP presidential candidate. "But Republicans haven't been talking about this. We've been talking about economic and fiscal issues. It's those on the left that are pushing it."

He chalked up his defense of the state's ban as an obligation to Wisconsin's constitution.