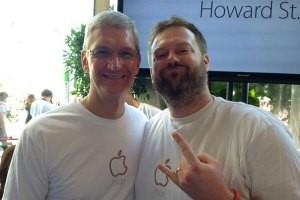 While Cook has neither denied nor confirmed rumors that he's gay, he is a strong supporter of LGBT rights.

In the last several weeks, two major outlets, CNBC and NPR, have repeated that rumor. CNBC's mention on Squawk on the Street led to an awkward moment.

Photos on social media from the event show a smiling Cook posing with various Apple employees.