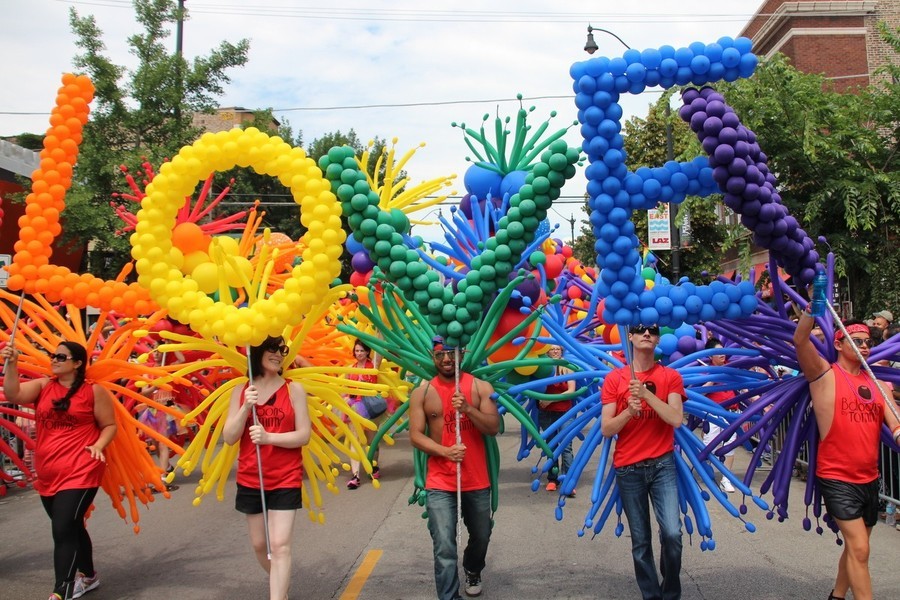 Chicago, IL - With Illinois' marriage equality fully realized statewide, celebration will be in the air when an expected 1 million people arrive today in Lakeview for the 45th annual Chicago Pride Parade.

The parade will included the usual mix of political figures, but this year's atmosphere is expected to be more festive and exciting as it's the first parade since Illinois' marriage equality became law statewide on June 1. Richard Pfeiffer, the parade organizer, told ChicagoPride.com that marriage equality will be part of the parade's theme, including several floats with people being married on them.

Since the first marches in Chicago, Los Angeles and New York in 1970, gay social and political life has changed significantly. What was once a march and rally has since become a parade and celebration of LGBT rights.

"As more of us have come out, it was inevitable that our institutions and, of course, the parade would become more mainstream," Pfeiffer added. "However, keep in mind that the parade still reflects various political, social and celebratory aspects of our community."

Openly gay athlete and music artist Will Sheridan will serve as the Grand Marshal for the parade, under the theme "Reflections of Pride" (Stonewall 45). The parade has 205 registered entrants, including new entries from the Shedd Aquarium and Art Institute of Chicago.

Illinois Gov. Pat Quinn, who signed the marriage equality bill into law last November, will march again this year. His opponent, Bruce Rauner, will not attend due to what a spokesman called a scheduling conflict.

Others scheduled to march include Sen. Dick Durbin and Illinois Senate President John Cullerton. State Comptroller Judy Baar Topinka and Reps. Jan Schakowski and Mike Quigley, who will mark his 32nd year participating in the parade.

"My first parade was in 1982, and I haven't missed one since," Quigley said. "Last year I walked the entire thing on crutches. And do you know what kept me going? People are so damn nice there, and constantly cheering. I was supposed to get in a car and ride, but it's very contagious."

Despite an online petition calling for him to be named as a Grand Marshal, state Rep. Greg Harris, who is considered the chief architect of the state's marriage equality legislation, told ChicagoPride.com that he will be marching with the same contingent as previous years.

"I think it is very flattering and sweet that people thought of me for the parade," Harris said. "But passing marriage equality was a labor of love in which thousands of people across Illinois participated."

"This parade we celebrate the diversity of our community and we also recognize the heroes and leaders who make our progress possible," Equality Illinois CEO Bernard Cherkasov told ChicagoPride.com. "As we celebrate, it's important to know that our job is not yet done, and on Election Day we have to re-elect all those who made marriage equality possible."

The Chicago Transit Authority said it will increase services and train service and is urging parade goers to use public transit. Riders will not be permitted to bring bikes on the trains Sunday, but bikes will still be allowed on most buses. Several bus routes will be impacted.

Earlier this week, Chicago Police Commander Ellias Voulgaris told ChicagoPride.com that security at the parade will be enforced more than ever, with extra officers on the route, potential $1,000 fines for public drinking and a crackdown on rooftop and balcony parties.

The parade combined with the Chicago Cubs playing the Washington Nationals at Wrigley Field twice on Saturday, the entire weekend will be a priority for police this weekend.

WCPT-AM 820 will broadcast the parade live from the Center on Halsted. A portion of the parade will be broadcast on ABC 7 on Sunday from 11:30 pm to 12:30 am.