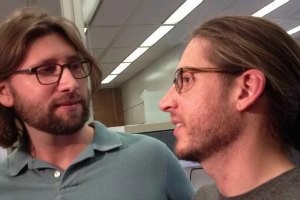 Indianapolis, IN - The first gay couple to legally marry in Indiana after a federal judge struck down the state's ban on gay marriage said "it just felt right."

The couple, together 8 years, said getting married was the next step in their relationship.

Marrying "just felt right," Bowen told The Indianapolis Star. "We had been talking about it for months or years and now that we can actually do it in our home state, we wanted [to] not waste any time."

Miller said with a chuckle that their parents might be angry with their spur-of-the-moment decision to marry.

"Our parents don't know yet, so they might be a little mad at us," he said. "I sent Craig a text and said, 'Hey, do you want to get married today?'"

"I love you," Miller told Bowen after the men exchanged vows.

Some county clerks said they were waiting for direction from state officials before issuing licenses to gay couples.