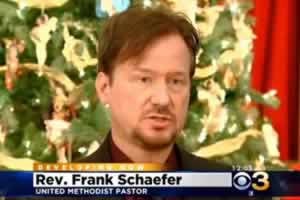 A United Methodist Church panel on Tuesday reversed the conviction of Frank Schaefer, who was defrocked because he presided at the wedding of his gay son.

According to the AP, the nine-member panel concluded that the punishment was too harsh.

Schaefer, who had been the pastor of Zion United Methodist Church of Iona in Lebanon, Pennsylvania presided over the 2007 wedding of his son Tim Schaefer to another man in Massachusetts, which legalized gay marriage in 2004.

The Protestant denomination's Book of Discipline accepts gay and lesbian members but rejects homosexual acts as "incompatible with Christian teachings."

Officials last year defrocked Schaefer, who has three gay children, after he called the church's position discriminatory and refused to recant.

The appeals panel also found Schaefer guilty but reduced the penalty to a 30-day suspension, which it said he had already served.

The panel ordered officials to restore Schaefer's credentials and "compensate Respondent for all lost salary and benefits dating from December 19, 2013."

The church has not said whether it plans to pursue an appeal.