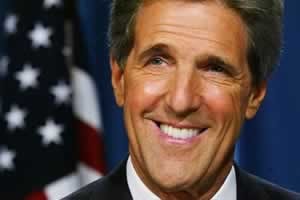 Secretary of State John Kerry has condemned foreign laws which discriminate on the basis of sexual orientation and gender identity.

In a statement released Friday in support of Gay Pride Month, Kerry reaffirmed the department's "commitment to the promotion and protection of the human rights of LGBT persons around the globe."

"In the United States, we have made marked progress in tearing down the unjust and unfair barriers that have prevented the full realization of the human rights of LGBT persons. We know there is more to do, but here, the arc of history is bending towards justice," he said.

"In many places around the world, however, trends are running in the opposite direction. LGBT individuals and their allies are harassed, arrested, and even killed because of who they are and the work they do. Governments are enacting laws that discriminate against LGBT individuals and their allies and restrict their fundamental human rights. The United States strongly condemns these discriminatory acts and legislation and is working every day, both here in Washington and at our embassies and consulates around the world, to ensure that all persons can exercise their human rights, regardless of their sexual orientation or gender identity."

"We raise the human rights of LGBT persons both publicly and privately, and we support civil society organizations who are working on the frontlines to ensure equality and dignity for all. Through the Global Equality Fund – a partnership supported by 14 like-minded governments, foundations, corporations and non-profit organizations – the Department of State has allocated more than $9 million for both emergency and long term LGBT-related programming in more than 50 countries worldwide."

"This important work, done in conjunction with allies from civil society, faith communities, the private sector and other governments, is central to our foreign policy. So, to the activists, allies, and LGBT individuals on the front lines combating discrimination, you have a partner in the United States. I stand with you and I wish you safe and happy 2014 Pride celebrations," Kerry added.