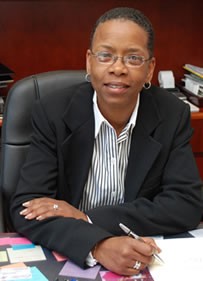 "President Obama has already nominated more African-American judges and openly gay and lesbian judges than any of his predecessors. With this historic confirmation, Darrin Gayles will become the nation's first openly gay African-American man to serve on the federal bench, while Staci Yandle becomes the second openly lesbian African-American woman to be confirmed in the 20 years since President Clinton nominated Deborah Batts to the Southern District of New York.

"Today, it is more important than ever that our courts reflect the growing diversity of our country, but we have a long way to go. There are nearly 900 federal judges in the U.S., and most are white men. Federal courts are charged with providing everyone with equal access to justice, and yet justice has not always been a reality for some. A diverse judiciary serves not only to improve the quality of justice, but to boost public confidence in the courts."

Today, the Senate confirmed Attorney Staci Yandle and Judge Darrin Gayles to become federal judges on the U.S. District Courts in Illinois and Florida, respectively. Ms. Yandle, a practicing attorney for over 20 years, will be the second Black, openly lesbian judge confirmed to the federal bench. Judge Gayles will become the nation's first Black, openly gay male to serve on the federal bench. Both nominees received overwhelming support from the Senate during their confirmation votes: Ms. Yandle was confirmed by a vote of 52 to 44, and Judge Gayles was confirmed by a vote of 98 to 0.

"I am thrilled that the Senate has confirmed Attorney Yandle and Judge Gayles to the federal bench," says Sharon Lettman-Hicks, NBJC Executive Director and CEO. "NBJC celebrates both confirmations that will inspire so many in the Black and LGBT communities. In addition, we celebrate the vast life experiences that they will take with them to the federal bench as they work to render impartial decisions. It's a significant sign of progress in our nation when two individuals are judged solely on their merits when being considered for these important lifetime appointments."

Ms. Yandle, a graduate of the University of Illinois and Vanderbilt Law School, has been a legal practitioner in southern Illinois since 2007, and has focused on representing victims of medical malpractice, nursing home abuse, defective products and civil rights violations. During her career, she also served as an adjunct professor at St. Louis University School of Law. When she is sworn in as a federal judge, Ms. Yandle will become the first Black judge to sit on the U.S. District Court for the Southern District of Illinois.

Judge Darrin Gayles received his J.D. from George Washington University Law School and his B.A. from Howard University. He began his legal career as an Assistant State Attorney in the Miami-Dade State Attorney's Office from 1993 to 1997. He served both as Assistant District Counsel to the US Immigration and Naturalization Service and Assistant United States Attorney in Florida's Southern District. In 2004, he began his judicial career when he became a County Judge in the Eleventh Judicial Circuit of Florida. In 2011, he was elected as the Circuit Judge for that same circuit. When Judge Gayles takes his post on the bench, he will serve on the U.S. District Court for the Southern District of Florida.