Adam Lambert teams up with AT&T for 'Live Proud' campaign 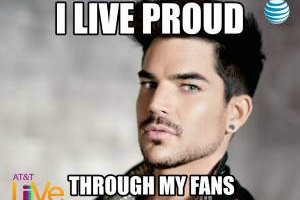 Openly gay singer Adam Lambert has teamed up with AT&T for the second year in a row to promote the "Live Proud" campaign.

The partnership was announced last week on AT&T's consumer blog.

"Today, too many LGBT individuals don't feel they have a voice, and this program gives them one," Lambert wrote in the post. "For me, I choose to 'Live Proud' through my fans and my music. By creating personal and empowering music that my fans can relate to, I aim to inspire and motivate them every day."

"I'm excited to be a part of this great movement that showcases AT&T's commitment to enriching and strengthening the lives of LGBT individuals everywhere. No matter what you believe in or what you identify as, this campaign gives you the opportunity to be loud and proud about who you are."

The "Live Proud" campaign encourages participants to create and share on social media (tagging should include @ATT or @AdamLambert and #ATTLiveProud) unique memes that represent how they "live proud." One lucky winner will be selected to meet Lambert at a private event in New York City.

"AT&T is committed to supporting diversity and has worked with various non-profit groups like the Trevor Project in the past and plans to do so again in the future," John Soriano told On Top Magazine in an email.