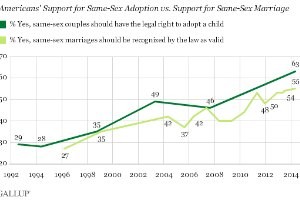 A large majority of Americans says gay and lesbian couples should have the legal right to adopt children.

When pollster Gallup asked 1,028 adults, "Do you think same-sex couples should or should not have the legal right to adopt a child?" 63 percent said "yes, should" while 35 percent said "no, should not."

That's a 34 percent increase in support since 1992, the year Gallup introduced the question.

Support for gay parenting has increased at a faster pace than support for marriage equality, currently at 55 percent according to Gallup's findings.

"In general, adults in the U.S. continue to be more supportive of same-sex parenting than legal recognition of same-sex relationships or comfortableness with same-sex sexual behavior," said Gary Gates of the Williams Institute at the UCLA School of Law, which studies policy as it relates to lesbian, gay, bisexual and transgender people. "Laws in the U.S. have reflected this pattern in public support. Many states in the U.S. that have not formally repealed sodomy laws, despite the U.S. Supreme Court declaring such statutes unconstitutional, and that do not recognize marriage for same-sex couples include jurisdictions that allow same-sex couples to adopt children."

Support is highest among Democrats (80%), but even a narrow majority (51%) of Republicans say gay couples should be allowed to adopt children.