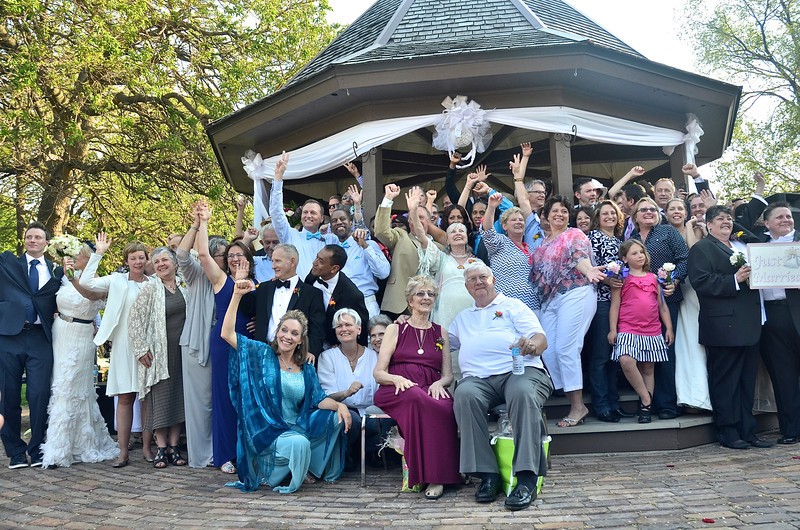 Organizers: 'It was an amazing day. Perfect weather, everything went off without a hitch'

Chicago, IL - Forty couples, both straight and same-sex, walked down the aisle as part of a historic group wedding ceremony in Chicago Sunday to honor marriage equality in Illinois.

"This is an amazing day," Windy City Times publisher Tracy Baim told those gathered in the spacious garden of Unity in Chicago, 925 W. Thome Ave. "Soak it in; it is one you'll remember all your lives, for the allies here as well as for the LGBT community. This is truly something we owe to millions of people who came before us."

"This is a day that is changing the world," Alfrey told ChicagoPride.com. "At Unity, we really are focused on equality and the rights for people to be who they are. I believe anything that allows us to quit looking at our differences is really going to create peace on earth."

Among the forty couples getting married or renewing vows there were 19 lesbian couples, 9 gay and 12 opposite-sex couples, including one couple that has been married for 60 years. Fifteen couples wed, as 25 renewed vows or expressed commitment. Over 500 people were in attendance to witness the ceremony.

Maggie Bynum sang musical selections including "At Last" for the couples.

"It was an amazing day. Perfect weather, everything went off without a hitch," Viggiano told ChicagoPride.com. "Best off all, all our straight allies who not only came to support marriage equality, but many also participated in the event. That was incredibly touching to see."

"Today is a special day and I thank everyone who worked so hard to pass marriage equality and put Illinois on right side of history," Illinois Gov. Pat Quinn said in a statement. "All couples across Illinois can now receive the rights and protections under the sacred vow of marriage. The Land of Lincoln has always been a place to embrace all people and today we stand as an example for the rest of the nation."

Most county clerk's offices, including Cook County's, were closed Sunday, so many couples likely cannot actually marry before June 3, given the state's 24-hour waiting period after obtaining a license. All Illinois counties in the state must be ready to issue licenses on June 2. Furthermore, all 102 counties in the state must be able to issue certificates to upgrade civil unions as well.