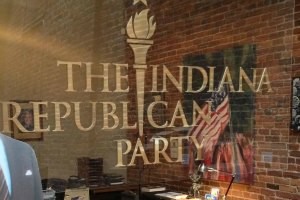 Fort Wayne, IN - The Indiana GOP's platform committee on Monday approved a proposal to reinsert language in its platform defining marriage as "between a man and a woman."

Indiana Republicans removed the clause from the platform two years ago.

Committee approval sets the stage for a larger debate on the issue when GOP delegates gather in Fort Wayne next month.

Republican delegate Megan Robertson told the AP that the party should remain neutral on the subject.

"This is an issue where there are a variety of opinions within the Republican Party, so the platform should not take sides on that," she said.

The proposal was introduced by lawyer Jim Bopp, who has previously represented the National Organization for Marriage (NOM), the nation's most vociferous opponent of marriage equality.

Earlier this month, a federal judge ordered Indiana to recognize the marriage of a terminally ill lesbian.