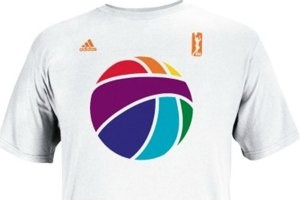 The WNBA on Wednesday announced a campaign to market itself to the LGBT community.

The announcement makes the WNBA the first professional sports league to mount such an effort.

"The WNBA welcomes all fans, athletes and partners to our game," WNBA President Laurel J. Richie said in a written statement. "These beliefs unite the 12 teams of the WNBA and we are very excited to introduce the WNBA Pride platform which celebrates acceptance and inclusion. The WNBA takes great pride in working with extraordinary partners who share these values, and we are so grateful to our presenting partner COVERGIRL along with ESPN, GLSEN and GLAAD for joining the WNBA on this important initiative."

The league launched WNBA.com/pride, a site devoted to Pride content, and announced a nationally televised pride game between Tulsa and Chicago to take place Sunday, June 22.

Openly gay Brittney Griner of the Phoenix Mercury said she was planning to wear rainbow-colored shoes during games during the month of June.

"We'll pave the way and show it's fine and there's nothing wrong with it. More sports need to do it.It's 2014, it's about time," Griner told the AP.