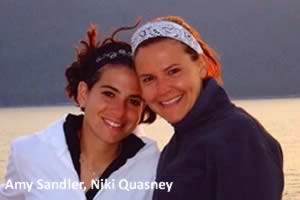 Indianapolis, IN - A federal judge on Thursday extended a previous ruling ordering Indiana officials to recognize the marriage of a terminally ill lesbian.

U.S. District Judge Richard L. Young handed down his ruling roughly a week after holding a hearing in his Evansville chambers.

Niki Quasney and Amy Sandler, who married last year in Massachusetts, the first state to legalize such unions nearly a decade ago, recently joined one of five lawsuits challenging the constitutionality of Indiana's ban on gay marriage.The couple asked Young to order the state to recognize their marriage so that Quasney, who has stage 4 ovarian cancer, can be listed as married on her anticipated death certificate and Sandler listed as her surviving spouse. Young issued a 28-day temporary restraining order on April 10.

"[T]he State of Indiana must recognize their marriage," Young wrote in Thursday's 14-page order."In addition, should Niki pass away in Indiana, the court orders William C. VanNess II, M.D., in his official capacity as the Commissioner of the Indiana State Department of Health and all those acting in concert, to issue a death certificate that records her marital status as 'married' and lists Plaintiff Amy Sandler as the 'surviving spouse.'"

The state argued that current law does not allow for hardship exceptions.

Young's order remains in effect until he renders a final judgment in the case.

Young also suggested he was likely to rule in favor of the plaintiffs: "Currently, all federal district court cases decided post-Windsor indicate that Plaintiffs are likely to prevail."

The women have been together 13 years and are raising two daughters, ages 1 and 2.