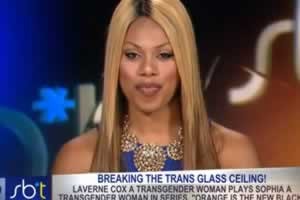 "Our 2014 marshals are leaders in brilliant forms of activism through which LGBT people and their allies engage," David Studinksi, march director for NYC Pride, said in a statement. "Individually, they represent the diversity within the LGBT community and the various struggles our community members have and continue to face. Collectively, their stories reinforce that no voice is too small nor weak to make change in our world – and it starts with being yourself."

Groff, who is openly gay, is best known for his television roles on Fox's Glee, Starz's Boss and HBO's Looking. He also appears in next month's AIDS drama The Normal Heart.

Cox, a transgender woman who portrays a transgender inmate in Netflix's Orange is the New Black, was recently honored by GLAAD for her activism.

Carey is the executive director of the National Gay and Lesbian Task Force.