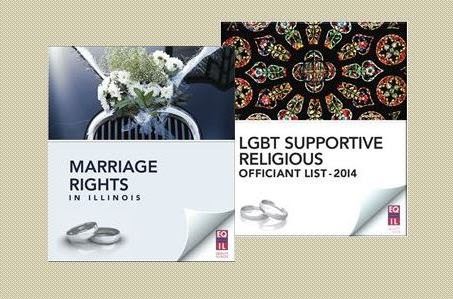 "Many clergy or religious institutions welcome same-sex marriages, so Equality Illinois created this listing, which we expect to grow, of faith leaders who embrace same-sex couples," Equality Illinois CEO Bernard Cherkasov said in a released statement. "Christian, Jewish, Muslim and non-denominational leaders from all corners of Illinois are represented in the guide."

The updated Equality Illinois guide Marriage Rights in Illinois answers most of the other questions couples have about taking advantage of the state's new marriage law, including how to convert a civil union into a marriage.

Illinois marriage equality law goes into effect statewide on June 1, 2014. Couples can already marry in Cook County due to a federal court ruling, which a number of other counties have also decided to follow. More than 1,000 licenses have been issued to same-sex couples in Cook County alone, according to County Clerk David Orr. The counties now issuing marriage licenses, according to an Equality Illinois survey of all 102 Illinois counties, are: Champaign, Clinton, Cook, DeKalb, Greene, Grundy, Hardin, Jackson, Macon, McLean, Ogle, Perry, St. Clair, Wabash, and Woodford.

The two pamphlets are available for viewing and downloading at www.eqil.org/marriage.