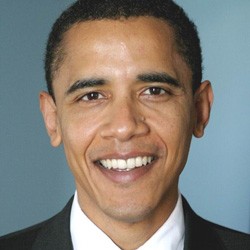 Described in a 2004 Chicago Sun Times article as someone Barack Obama regularly seeks out for "spiritual counsel", James Meeks, who will serve as an Obama delegate at the 2008 Democratic convention in Denver, is a long-time political ally to the democratic frontrunner.

When Obama ran for the U.S. Senate in 2003, he frequently campaigned at Salem Baptist Church while Rev. Meeks appeared in television ads supporting the Illinois senator's campaign. Later, according to the same Chicago Sun Times article, on the night after he won the Democratic primary, Sen. Obama attended bible study at Meeks' church ‘for prayer' and ‘to say thank you.'

Since that time, not only has Meeks himself served on Obama's exploratory committee for the presidency and been listed on the Obama's campaign website as one of the senator's ‘influential black supporters', but his church choir was called on to raise their voices in praise at a rally the night Obama announced his run for the White House back in 2007.

The problem for Obama is that Rev. James Meeks, like Rev. Jeremiah Wright, preaches a message that appears to be directly at odds with the promise of hope, unity and bridging social, racial and political divisions upon which his campaign is built.

Over the years, Rev. Meeks has garnered significant media attention as a result of a number of racially charged remarks he's made from both behind and out in front of the pulpit. Most notably, in 2006, Meeks came under fire for an inflammatory sermon he gave in which he savaged Chicago mayor Richard Daley and others, including African-Americans who were Daley allies.

"We don't have slave masters. We got mayors. But they still the same white people who are presiding over systems where black people are not able, or to be educated."

Perhaps of even more concern than race-baiting diatribes like these is Rev. Meeks disturbing history of antagonism towards the LGBT community.

A spring 2007 newsletter from the Southern Poverty Law Center (SPLC) named Meeks one of the "10 leading black religious voices in the anti-gay movement". The newsletter cites him as both "a key member of Chicago's ‘Gatekeepers' network, an interracial group of evangelical ministers who strive to erase the division between church and state" and "a stalwart anti-gay activist… [who]… has used his House of Hope mega-church to launch petition drives for the Illinois Family Institute (IFI), a major state-level ‘family values' pressure group that lauded him last year for leading African Americans in ‘clearly understanding the threat of gay marriage.'"

The SPLC newsletter also noted that, "Meeks and the IFI are partnered with Focus on the Family, the Family Research Council and the Alliance Defense Fund, major anti-gay organizations of the Christian Right. They also are tightly allied with Americans for Truth, an Illinois group that said in a press release last year that ‘fighting AIDS without talking against homosexuality is like fighting lung cancer without talking against smoking.'"

On a more personal level, Meeks has reportedly blamed "Hollywood Jews for bringing us Brokeback Mountain" and actively campaigned to defeat SB3186, an Illinois LGBT non-discrimination bill, while serving in the Illinois state legislature alongside Obama. According to a 2006 Chicago Sun Times article, his church sponsored a "Halloween fright night" which "consigned to the flames of hell two mincing young men wearing body glitter who were supposed to be homosexuals."

And so here we are again confronted with a situation in which Barack Obama's choice of allies is likely to confound voters. Though his relationship with Rev. Meeks is not nearly as significant as his affiliation with "spiritual mentor" Rev. Jeremiah Wright, Sen. Obama's ties to Meeks are nonetheless disconcerting, particularly in the wake of his recent address on race in America and his campaign's early fumble surrounding the decision to invite homophobic gospel artist Donnie McClurkin to perform at a campaign Faith and Family Values fundraiser in South Carolina.

Some, like CNN contributor Roland S. Martin (who, for the record, is a member of Meeks' Salem Baptist Church), say, as he did in a recent commentary on the cable news network: "Everyone has an association that is open for scrutiny. Our real focus should be on the candidates and their views on the issues, because one of them will stand before the nation and take the oath of office and swear to uphold and protect the Constitution of the United States."

But the question remains: At what point must a candidate for the highest office in the United States be held accountable for the small coterie of individuals who make up his or her inner circle and potentially bear influence on his interpretation of the constitution? And at what point does the benefit of the doubt give way to guilt by association?

Moreover, how can a candidate cultivate a constituency like that of Rev. James Meek, essentially espousing a shared belief in their value system, become an effective and powerful advocate on behalf of issues like LGBT rights that run counter to fundamental agenda of that constituency without experiencing severe repercussions? The answer is he can't.

Just as Hillary Clinton cannot cherry pick the successes and pitfalls from her husband's administration that suit her campaign, neither can Barack Obama divorce himself from the implications surrounding the bedfellows he has made over the course of his relatively short political career.

Put even more plainly... Barack Obama can't have it both ways, which increasingly seems to be his campaign's modus operandi.

While it is altogether plausible that, in the spirit of bringing hope and unity, a civil rights leader might sit down with members of white supremacist groups to address racial differences, it is another thing entirely to propose that the same civil rights leader could count any of those white supremacists among his closest friends because he finds them to be inspirational people if, you know, you take that pesky race thing out of the equation.

Similarly, while potentially capable of co-existing peacefully in an environment of mutual respect, the homophobe and the LGBT rights advocate aren't likely to be found cooing at or canoodling with one another in private because they share so many other common interests. Yet these are precisely the kinds of scenarios that Barack Obama asks the American people to accept on faith each and every time unsavory questions arise about the associates with whom he has chosen to surround himself. Ultimately, it is this porous type of reaction that may be Sen. Obama's undoing. But, then again, perhaps not.

Obama's critically well-received speech on race in response to the Jeremiah Wright scandal seems to have quieted mainstream concern over the senator's views about race while simultaneously forcing the media to tip toe around discussing race as it pertains to his campaign to become the Democratic presidential nominee. So maybe talk about Rev. James Meek and Barack Obama will summarily disappear from the political radar, but one thing is for sure —it shouldn't.

Growing up, my octogenarian grandmother always told me, "If you lie down with dogs, you're going to get fleas." Life and experience have taught me she was right, which says to me that in light of his cozy relationship with anti-gay poster child, Rev. James Meeks, Barack Obama ought to be feeling awfully itchy right about now.