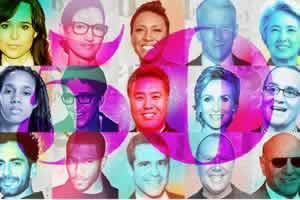 The 56-year-old DeGeneres returned to the top spot in this year's list of most influential gay people, knocking out last year's champ Apple CEO Tim Cook.

"Everybody loves Ellen, and that's one of the reasons she's regained the top spot," Out editors wrote. "In March, The Ellen DeGeneres Show shattered its own 10-year ratings record in the episode that immediately followed her Academy Awards hosting gig, which also gave the awards its best ratings since 2004. And her star-studded Oscars selfie almost shut down Twitter when the pic became the most retweeted ever."

This year, Cook traded places with DeGeneres, who was named second most influential last year.

In fourth place was Wisconsin Senator Tammy Baldwin. And journalist Glenn Greenwald rounded out the top 5.

JoeMyGod noted the unusual absence of last year's #21 ranked Matt Drudge: "Since there's no obvious reason for Drudge to completely fall off the list in one year, I wouldn't be surprised if somebody got a cease-and-desist letter."

Also missing from the list is Fox News' Shepard Smith, a staple of previous years.